The top link on my sidebar goes to Mark Mann, a relatively new green blogger at the Daily Telegraph.
I'm not sure where they found him, but he manages to put his foot in it in almost every post.
Take this one before Christmas, where he said:

I’m in England at the moment… an opinion poll for The Guardian yesterday found 95 per cent of Britons believe humans are warming the planet.
But in the same poll, 45 per cent said climate change was important but politicians “must not lose sight of the need to maintain human prosperity”.

Thanks to the Evil Google, it took me about 2 minutes to find the Grauniad article that he was referring to. Here are the charts that went with it. 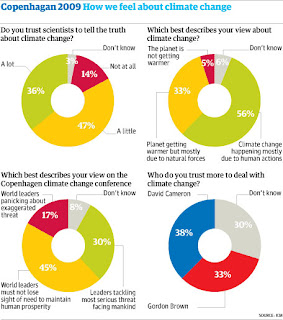 The interesting thing is that the original poll in the Grauniad said no such thing as "95 per cent of Britons believe humans are warming the planet".
Big difference between 95% and 56%.
Mark must have gone to the same school as Al Gore. What a cretan*.
*Yes, I know this is the wrong spelling. It's an in-joke.
Badly proofread by Boy on a bike at Saturday, January 16, 2010

You've now got me checking his blog occasionally just to see your comments on his posts. I hope he appreciates all the attention from his most prolific commenter.

Or maybe he just has you down as a marked man (bad pun intended).

It can take days for comments to appear. Unlike Tran and Nkomo, Green moderators appear to undertake employment on a sporadic basis.