Not understanding the road rules

If there is one thing I expect a taxi driver to know, it's the road rules. From my observations as a cyclist, driver and taxi passenger, either a lot of drivers don't know the rules, or they just can't be arsed following them. I'd be interested to know what the case is.
Here's a simple one - note the red "no stopping" sign in the top left hand corner, and the taxi conveniently stopped in the cycle lane. If I dared to stop in a taxi zone, I am sure that half a dozen taxi drivers would beat me to death. 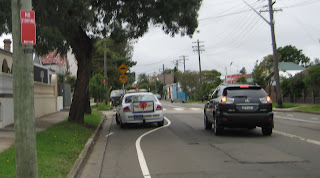 And just to show that T 1652 is in fact stopped, here's another photo taken a few seconds later, showing the hazard lights blinking. 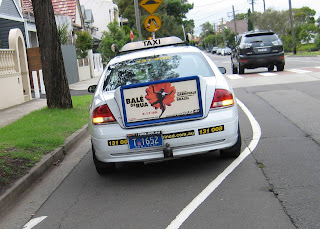 Taxis are allowed to stop in "no stopping" zones, but only in the Sydney Central taxi district. I'm afraid that starts about 3km east of here.
On to more pleasant things, here is another cyclist with a Global Corporate Challenge backpack. 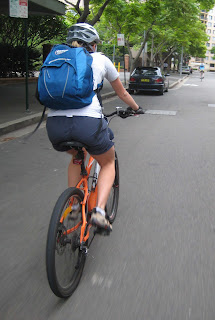