It appears that lots of people made a New Year's resolution to start riding to work. I think the bloke in this photo is one of them. He was slow, had no idea about how to pass pedestrians, and within 30 seconds of being trapped behind him, there were at least a dozen other cyclists jammed up behind me. It's all very well resolving to get fit or save money on buses or whatever - but I do wish these people would not all decide to start riding at the same time. They clog up the cycle ways with more gusto than an Exxon Valdez full of clag. 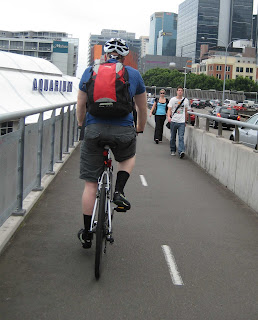 Speaking of things weighing a lot, the woman on this bike demonstrated what mass (or a lack of it) can do. I caught up with her as I was coasting down a hill, and I had to brake to avoid crashing into her. She was pedalling by the way. She kept on rotating those pedals as we started going uphill, but I had to remain on the brakes. I had so much momentum, I was in danger of rear-ending her going up hill. (This was a tricky action shot to get by the way, as I was constantly on the brakes to avoid taking her out. She simply wasn't heavy enough to go fast). 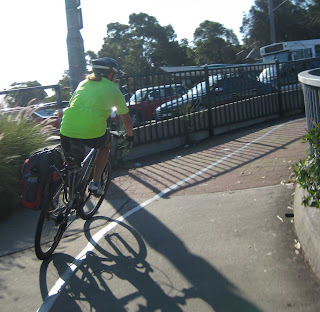 Interesting attire - perhaps another gent who has made a resolution. He's wearing a white singlet and baggy shorts. He was anything but sartorial. 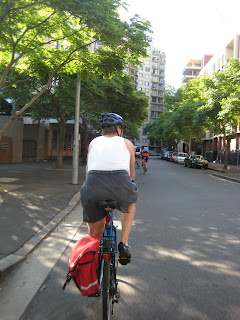 Cool view of the bridge. 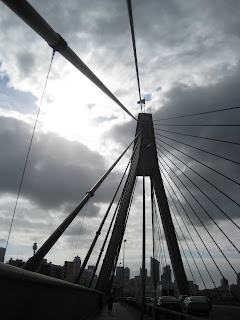 I haven't really worked out how to take photos from side on and slightly to the rear, so this photo misses the salient feature which is that the cyclist has her helmet dangling from the handlebars. I can understand not wanting to ride with a helmet - your head gets all sweaty and it messes up your hair - but what is the point of taking one with you but not wearing it? 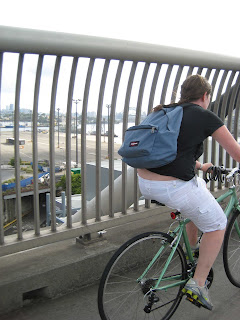 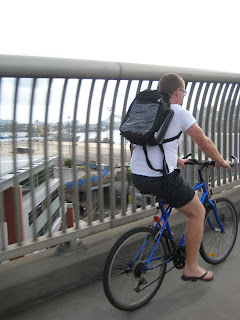