The gleaming of the newbies

I got stuck behind this bloke for a minute or two today. He was having lots of trouble with his gears. He'd change up, then down, then up again, and appeared to not realise which lever controlled which gear set. 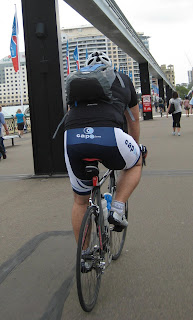 After 20 seconds or so, I figured he must be a newbie. His bike shone like crystal. His rear gear set was silver and gleaming (mine is black and crusty). His bike glided along silently - mine creaks and groans from 5 years of abuse and a dozen untightened bolts and worn out bearings.
His shoes were also shiny, whilst mine are scuffed and filthy. His shorts and jersey were also new and shiny - my jersey is pilled to death and my nicks are one fart short of this.
The kicker was his untoned calf muscles - serious roadies have calves that look like a sock full of snakes on speed.
At least he is giving it a go, so good luck to him. We all started out this way. I wonder if in five years time, he'll be zipping around on a creaking and slightly rusted and battle scarred bike, having worn out countless tyres and thinking, "That used to be me".
Badly proofread by Boy on a bike at Monday, January 25, 2010

Heh,
Now Boab, what about those of us who've just bought themselves a shiney new roadie for Xmas, after spending 10 years or more on their old MTB?

Was very happy to be able to keep up with a bunch of moderately serious roadie types this morning. Admittedly, they weren't really trying too hard!

A new roadie? Woohoo, you're moving up in the world. Welcome to the club.

Did you accesorise it with lots of other shiny kit, or is the bike the only clean thing in your bicycling wardrobe? The thing I forgot to mention about the Gleamer is that even his gloves were shiny - mine are threadbare and dull - the result of many wipes across a sweaty brow.

No,
I did buy a new pair of knicks and gloves, but mostly it's the old grimy gear (well, about a year old) I'd been wearing on the MTB... Just transferred the lights and stuff over. Did get a new computer. And the shoes of course. Fuck me I'm hating these road pedals. I'm used to double sided pedals and getting into these is a f*%king hazard!!