What is it about Friday bringing out the fuckwits?
Especially taxi drivers.
Here's a snap of the taxi T 960 illegally overtaking me this morning by crossing over a double white line to get around me. He'd been behind me at the red light just back down the hill, and was obviously unimpressed with my acceleration, for no sooner was I across the intersection than he blatted around me. At least he gave me a wide berth, which is a nice change. 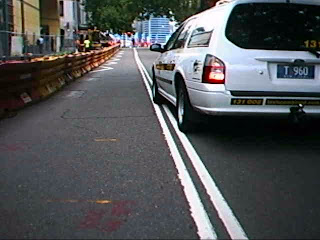 Didn't do him any good - he got stuck at the next intersection, and I simply went around him. Tool.
Disclaimer - the next three taxis that I saw were driven in a calm, considerate and professional manner. So it's nice to know that only 25% of the taxi drivers that I encountered this morning were insane boofheads who found their licence in a weeties packet.
Badly proofread by Boy on a bike at Friday, January 15, 2010