In an effort to put on a few more miles after the Xmas break (in order to take off a few extra kilos), I headed west on Sunday morning for a few laps of the Olympic Park precinct. On the way, I spotted this mad bastard cycling across this rather large bridge in the car lane - sensible people like me stick to the bike track. However, with his speed, and with the next to nil traffic at that time on Sunday morning - why not? 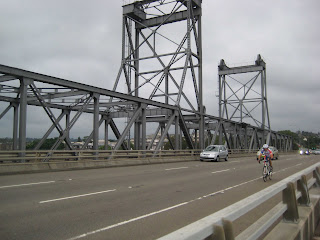 This bloke was making a big deal of racing up this short rise, so I had to take his photo. It was accompanied by lots of huffing and puffing and throwing of the bike from side to side. 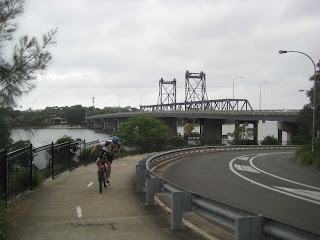 Arty, sculptury type things along the river bank. It took me a minute to work out that they're supposed to be boats. 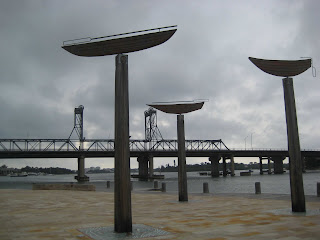 Nice bit of tile work around the base of those poles - I could do with this in my bathroom. I'd feel very Roman Emperor then. 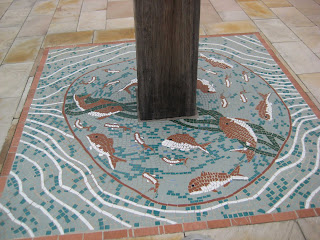 A bloke paddling out to his yacht in a very tiny boat - like a cockle shell. If a ferry went past, even the smallest bow wave would have swamped him. 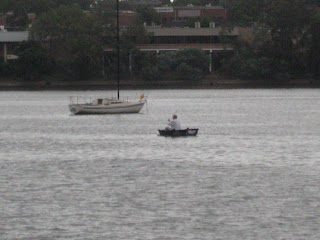 It was definitely the time and place for lots and lots and lots and lots of cyclists - and almost no cars. I reckon I saw five cars over a few hours - during peak hour, the route I took is balls to the wall traffic. Not far from where I took this photo is an Ikea store - as soon as that opens, traffic madness descends on this whole area. It's best to be gone from here at least half an hour before Ikea opens up. Never get between a desperate weekend decorator and an Ikea store. 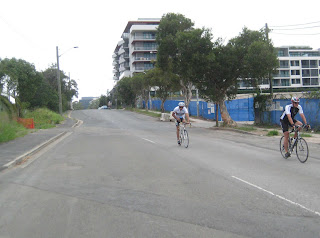 There are seven cyclists in this shot. 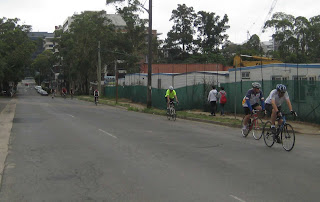 There are nine in this one. I could bore you all night with lots of photos of streams of cyclists, but I won't. Just accept my word that there were an awful lot of them about. 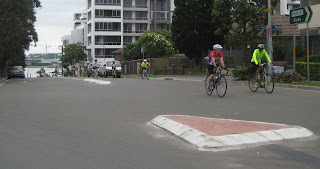 Tai Chi was also pretty popular in a few spots. Yes, there are only two doing it here, but there were singles and pairs and small groups dotted all over the place. 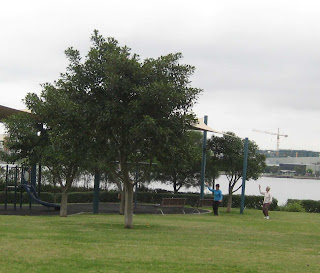 I was dying for a coffee after a while, but the only place that I could find was the Gloria Jeans at Rhodes. A few desperate cyclists were stopping for a coffee, but I decided to press on and try and find an open cafe somewhere in the area. I completely failed. There are cafes out there, but none were open when I went past them. I somehow struggled home with caffeine depleted blood. 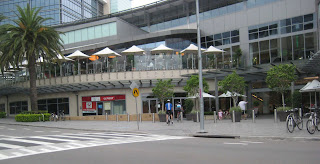 When I got into Olympic Park, the amount of traffic made passing difficult in places. Most of the cyclists appeared to be blokes my age and older - no young whipper-snappers tearing around at that hour. I noticed later that although I saw hundreds and hundreds of cyclists that morning, not one was riding around without a helmet. I'm used to seeing at least one person a day without one, but I guess the Sunday morning demographic is older and much more risk averse that the hip young unhelmeted people I see when riding to work. 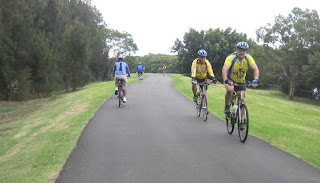 Rollerskates - I reckon this bloke was middle aged when Rollerball came out in 1975. (What a great movie that was). 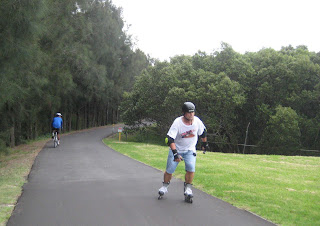 As part of the housing development out that way, the developers have put this fitness thing in. I guess it was part of the development approval. There was no sign anyone had ever used any of it. I did spot an empty sauce packet, which suggests it's a nice spot to sit and eat a pie and sauce. I think what the locals want to do out here is walk, cycle and do a bit of Tai Chi. Doing pull ups and push ups and crunches is just not their cup of tea. 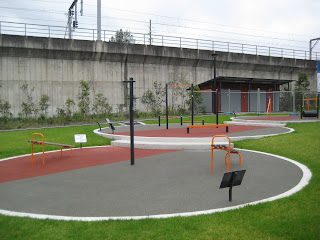