Depleted uranium - when the numbers just don't add up

Thanks to JF Beck and Gavin Atkins, we have a lurid insight into the wild fantasies of the Left.
Apart from the Grauniad failing to understand that DU rounds are fired from tank cannons rather than rifles or field artillery, the numbers behind the story just don't add up.
There are lots of wild stories about depleted uranium zooming around teh interweb. Here is a good one from a bloke tellingly named "greenerblog"

It was estimated that during that assault over 10,000 tons of depleted uranium, DU, was used in the bombardment of the city of 300,000 people. Both the Pentagon and the British governments insist that the use of DU is not illegal. Source
This 10,000 tonne figure is doubtful. It may relate to the amount used in Iraq as a whole - see below.

At least he has the sense to say that the 10,000 tonne figure is doubtful. It's more than doubtful - it's probably incredibly bloody stupid.
This is what a DU round for a 120mm tank cannon looks like. The spike in the middle is made of DU and titanium. If you want to read more about this round, go here. 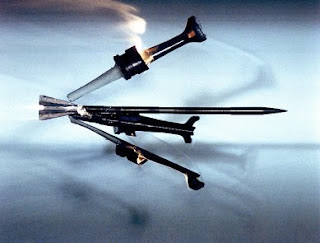 "It's primary function is the destruction of threat tanks and armor fighting vehicles. Target penetration is affected strictly by the high kinetic energy of the DU core when it impacts. Like other DU munitions, these are identifiable by their black color with white markings on the projectile (pointed) end. M829 series ammunition is loaded and fired in the normal manner. This ammunition will not be fired over the heads of friendly troops unless troops are protected by adequate cover as they may be struck by the discarded sabot."

Depending on which model of ammunition is used, a DU round weighs between 41 and 56 pounds in total. That's 19 to 25kg. That's the entire round - the DU penetrator, the sabot, the casing and the propellant.
From this site, we get an estimate of how much DU there is in each round - 10 pounds per round, or 4.5kg:

"How much DU was used in the Gulf War? A 1991 report in The Independent said of the rounds fired by tanks and aircraft: "The best estimates were that the US tanks fired 5000 rounds, US aircraft many thousands of rounds, and British tanks 'a small number.' The tank ammunition alone would contain more than 50,000 pounds of DU, enough radioactive material, the International Committee of Radiological Protection estimates, to cause 500,000 potential deaths, if it were inhaled." How much was used in other DU-containing weapons is not known outside the Pentagon. The LAKA Foundation estimates that the total amount of DU used in Iraq exceeds 800 tons."

At the other end of the spectrum, if you search Google for "Pentagon admits to having used 1,200 tons of DU in Iraq", you'll get 408,000 hits. Nowhere can I find a link to the original story that quotes anyone from the Pentagon, or the US Military. If you find it, let me know.
Assuming that 1,200 tons of DU was fired from Abrahms tanks, at 4.5kg per round, that comes to an amazing 266,666 rounds of 120mm ammunition.
That's just not credible. 5,000 rounds were fired in all of Gulf War I, presumably to kill Saddam's tanks. The video below shows HEAT and SABOT (DU) ammunition being used to kill tanks on the firing range.
The only thing that SABOT, or DU rounds are good for is killing thick skinned tanks. They are a waste of time on buildings of personnel. If you see troops in the open, you use a canister round. If you want to kill troops in a bunker or a building, you can use something like a high explosive obstacle clearing round or a good old high explosive multi purpose round.
In case you are wondering why I think the figure of over 250,000 rounds of DU being fired in Iraq is stupid, here's a photo of some pallets of 120mm ammunition being unloaded in readiness for loading up some tanks. There are 30 rounds per pallet, and the HEMTT (truck) that's being unloaded can carry about 10 tons. As each pallet weighs about a ton, let's assume 10 pallets or 300 rounds per truck. 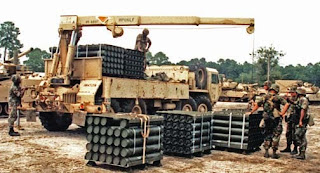 At the start of this blog, I noted the wild claim of "10,000 tons" of DU being fired into Fallujah alone. If we assume they mean that 10,000 tons includes the total weight of ammunition, then we are talking about needing 1,000 truckloads like the one above. If we are talking about just the weight of the DU at 4.5kg per round, then you're talking about an impossible 2.2 million rounds of 120mm tank ammunition - all that to kill around 6,000 insurgents.
An Abrahms can carry 55 rounds of main gun ammunition, and can fire at 6 rounds per minute. You can't maintain that rate of fire for ever, as the gun tube would quickly overheat.
The battle of Fallujah lasted about six weeks - for about 60,000 minutes. Tanks would need to be firing 37 rounds per minute for that entire 6 weeks in order to fire 2.2 million rounds. 7400 truckloads of ammunition would need to be brought forward in order to fire off that many rounds.
It just doesn't add up.
There are of course other possible sources of radioactive contamination in Fallujah - such as the leftovers from Saddam's nuclear program.

"U.S. and Iraqi forces have guarded the 23,000-acre (9,300-hectare) site - surrounded by huge sand berms - following a wave of looting after Saddam's fall that included villagers toting away yellowcake storage barrels for use as drinking water cisterns."

Drinking out of yellowcake storage barrels - that can't be good for you.
I got that link from this guy:

"Then, in 1991, the US Army and Marines faced five Iraqi Republican Guard divisions ladened with Soviet tanks. A-10 aircraft and M1 tanks killed hundreds of Iraqi tanks with DU and SABOT rounds.
In 2003, we faced Iraqi armored divisions again, so A-10s roamed the skies ahead of the American invasion and M1 Abrams tanks probably carried some SABOT rounds (although, I have no personal data describing tank ammunition loads during the initial invasion). The 2003 invasion force stayed far away from Fallujah. Baghdad and Tikrit were the targets.
I spent three years researching the battles for Fallujah. I have spoken to tankers, Light Armored Vehicle Marines and Bradley commanders and I have obtained logistic reports. Nowhere, in all my extensive research, have I found a single piece of data to indicate that SABOT or DU rounds were even carried in the armored vehicles that were used in Fallujah. Furthermore, no A-10s were ever used in Fallujah.
My research not withstanding, it makes no military sense to employ DU munitions in an urban environment. They are tank-killing weapons and the enemy had no armored vehicles in Fallujah. A DU projectile would travel through wall-after-wall, leaving a golf cup size hole. They wouldn’t do much damage and would do little more than scare the enemy. The benefits of using DU would not justify the expense.
So, lets all drop the discussion of DU causing all the birth defects in Fallujah. It is fantasy."

Interestingly enough, the mob that pushed the initial idea about DU being used in Fallujah are a neo-Nazi news organisation - America Free Press. They're likely to be a really credible source - not.
Badly proofread by Boy on a bike at Tuesday, January 04, 2011

Labels: Military, People who should be shot

I'll take that as a yes, considering the visit. Happy New Year

Won't cost you a six pack.