Yes, I've been through a short hiatus. I couldn't think of anything to write, so I packed away the keyboard for a week or so. Prior to having a family, I used to do some of my best writing very late at night - like at 2am kind of late. I'd wake up with an odd idea, sit down at the keyboard and bash it out (this was also in the days before blogs existed). That doesn't happen any more - usually because I am so shattered by 2200hrs that the thought of getting up at 0200 is just too much for my brain to bear. It gratefully shuts down and doesn't think of anything at all until the sun comes up.
Speaking of the sun coming up, I think I'm getting back into that season when I'll catch some good early morning photos. I reckon the ingredients for a good early morning shot are as follows - get up early to catch the dawn (duh!), have enough clouds to give the sun something to reflect off and if possible, have still water for the clouds to reflect off. The sun gets up too early for me in summer, so I miss the most important bit - get there at sunrise. There's also not enough cloud cover around. However, as the days get shorter and cloudier, the odds improve on me grabbing a good snap. 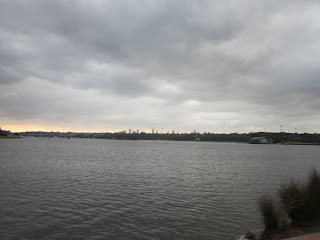 Speaking of grabbing, I almost grabbed the fixie with the blue back pack on Friday - as in my wheel grabbing his as we nearly smacked into each other. It was mostly my fault (not looking in the right direction), but it didn't help that when I did something totally stupid, he was completely unable to slow down. Being a purist, he didn't have brakes. Yes, he was fast and fit and went over the bridge at a good clip, but I have to shake my head at the antics of these guys at times. 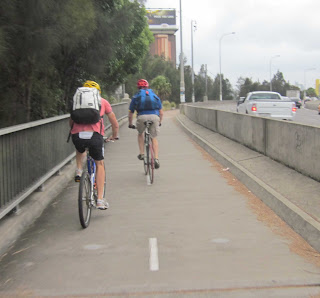