I feel ripped off - I'm sure I took more than one photo yesterday! How could I go a day with taking just one photo? It's not like I dropped the camera or the battery went flat. Maybe my reactions are slowing down - I'm just not whipping the camera out quickly enough to catch the action as I zip by. 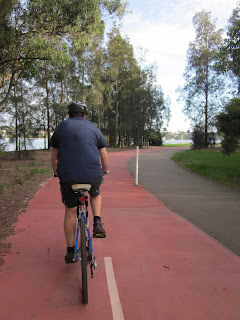 This bloke was dawdling around the Bay Run. This section is rarely used by cyclists because it essentially ends in a dead end just ahead. What's the point of riding along a section of track that goes nowhere? I ride along here because I jump onto a street at the end and that takes me towards town, but for cyclists wanting to do laps of the Bay to keep fit, it's a bit of a waste of space.
I guess it is a case of "build it, and they will come" - but only if you build it properly and complete 100% of whatever you are building. Cyclists won't use a track that is only 90% complete - or in this case, about 50% complete.
From reading the local rag, I notice the missing section is going to be built soon. However, the numbskulls in charge aren't going to build properly separated bike and pedestrian paths (like you see in the above photo - pink for bikes, black for people). Instead, they're going to but in a single, 3 metre wide shared path.
That's about the stupidest thing possible - but that's what we've come to expect from our incredibly stupid Labor government. They can't get the big things right, and they can't get the small things right. They fuck everything they touch.
Badly proofread by Boy on a bike at Saturday, January 15, 2011

Labels: Bay Run, burning our money, Council, cyclists, People who should be shot