Street festivals - worse than a pimple on my bum

We attended Ferragosto today, which is the local Italian street festival. By far, the best part of it was the council brochure that appeared in our mailbox last week to plug it. The brochure is a beauty - glossy, with a cover that screams "Tuscany" and "Venice". 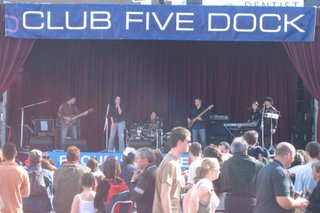 As we were walking towards Five Dock, the first thing we heard was some bad singing, well amplified. It turned out to be Cosima De Vito. Who? Well, if that was your reaction, then obviously you have not been watching Idol either. The puff piece in the brochure says that she was a top 12 finalist in the 2003 series. You could have fooled me. She belted out a couple of well known songs, and the crowd just stood there and tried not to put their fingers in their ears. Thankfully, the sound engineer realised he was at a family event and not the Metro, so he didn't crank the volume up to 11. You could actually stand 30 metres from the stage and talk, which was good, as we talked about how awful the singing was.

She has a really bad stage presence. It's just tragic. She did the old hold-the-microphone-out-to-the-crowd trick in the hope that the crowd would sing along with her, but the crowd stood there like Michelangelo statues and refused to be moved. Well actually we moved along - as far away as possible.

The festival had all the usual suspects - jewellry stalls, food stands, a slippery slide thing, a bouncy castle, a few wine tasting stalls, organic plates made from some sort of palm frond and another tonne or two of rubbish. It was really just low grade trash. It was hopeless. I've been going to the Good Food markets at North Sydney and Pyrmont off and on over the years and those are really well run markets. They are clean, tidy and packed full of things that I want to buy.

Ferragosto was like a market with a few rides and slides and of course every cafe on the street had a table out selling hamburgers, coffee and steak sandwiches. Sorry, but I can't get past the idea of Italian cafes doing a sausage sizzle. Shouldn't they be making and serving something that is vaguely Italian? 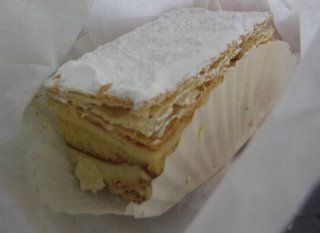 We did sample a couple of Italian desserts. I tried the thing pictured here, which is a bit like a vanilla slice, except that it is yucky and expensive. I couldn't eat the top half - it was too sickly sweat. I just ate most of the bottom part and then binned the lot. Thankfully, her Ladyship had bought a tiramasu in a cup, and I washed ot my tongue with a bit of that. The tiramasu was complete garbage too - the cream was too sweat and the biscotti had been left to soak in coffee for about a minute rather than a few seconds. They were soggy and squishy. The coffee in them was good, but they ruined the tiramasu. Between the two of us, we managed to finish it though. 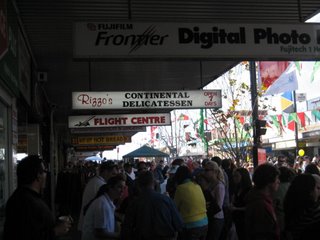 This is not a very good photo of what the street was like - completely packed. I normally spend about 20 minutes at these festivals - as long as it takes to walk from one end of the street to the other, maybe picking up a sausage in a bun on the way. We were at this one for about two hours, because it took that long to push the pram from one end of the street to the other through this throng. I should have spent my time photographing people. I saw one guy - about 45 - wearing a crushed gold velour polo necked top. I reckon he thought he was cooler than James Bond. He was a complete dick. 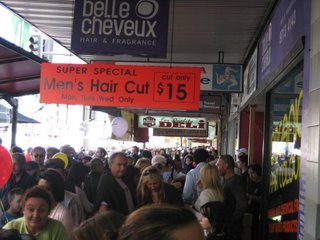 This is street scene number two. I took it because the orange sign is to me an authentic symbol of Five Dock - bad hair cuts for $15. It is not the kind of area to have nice salons where you can get a good haircut for say $20. It is full of awful wog shops that only know how to butcher your head.

Apart from that, I bought a steak sandwich from the butcher. The only reason I bought one was because he had a tray of raw steaks out for you to look at, and they looked good.

He might have known how to cut up cows, but he couldn't run a BBQ for nuts. The steak sandwiches were not good.

I also spent $10 on two tubs of gellato, from supposedly the best gellato shop on the street. Well, they might be the best in Five Dock, but they compare pretty poorly to our favourite shop in Balmain. I bought a dish of chocolate and vanilla, and both were awful. Couldn't eat mine. At $5 a dish, I'm expecting top class ice cream. That's not what I got. I can't describe what was wrong with it - it was just bad. The vanilla didn't taste like vanilla at all. I've had plenty of home made icecream made with a real vanilla bean, and it is good. Vanilla beans impart an amazing flavour of vanilla that is nothing like say Peters icecream. This tasted more like goats piss.

I was hoping to get the little monkey a balloon, but it turned out that the only people giving away balloons were the local MP and her challenger. A yellow balloon for Labor and a blue balloon for Liberal. When we got to their stands, both were unmanned and both appeared to be out of balloons. No floating monkey it turns out.

One good thing did come of it - we found a stall manned by the AustralAsian Specialty Coffee Association. They run a competition to find the best barista. We got there too late to see the competition that they held, so I have no idea who won. I had a look at their website and some related links and found this photo of the stupidest thing you can do to a coffee. It's a drink for goodness sake!

The AASCA bloke did correct one misconception that I had - there are in fact 3 different types of macciato - a regular, a piccolo and a something else. I had a look at their website to find out something about the different styles, and found nada.
Badly proofread by Boy on a bike at Sunday, August 13, 2006

have you tried http://www.noacneforme.com/ I bought it last month and it is surprisingly well written informative and it helped med to get rid of my pimples in just under 2 weeks