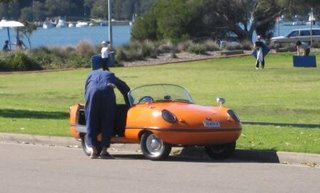 I thought these things only existed in Shannon's car insurance advertisements until this one pulled up near me the other day. It was making horrible spluttering two-stoke engine sounds and the driver hopped out and crawled around under the dash for a minute before hopping back in, firing it up and departing in a torrent of horrible two-stroke noises. He was wearing overalls, so either he was a mechanic who was taking it for a test drive, or he was the owner and he was used to having to tinker with it every time he takes it for a spin.

On other things motoring, I was killing time in a waiting room recently and I was reading a car magazine (Motor Mag I think) and I took offence at one of the letters to the editor. In the previous edition, they had done a story about AAMI (an insurance company) and the top 10 cars that were involved in claims.

I think the top was a Lexus, and then a whole list of 9 other totally boring cars.

Some idiot then hopped onto his PC and bashed out a letter exclaiming that as there was not a single Holden SS Commodore or HSV Ute or Falcon XR8 or whatever in that list, then drivers of hotted-up V8's must be much safer drivers.

Consider for a moment that the list was published by AAMI, which must be one of the safest, dullest and most boring car insurance companies in Australia - if you discount the Pensioners Insurance mob. I doubt AAMI would write cover on a V8 Statesman, let alone an HSV anything or a Subaru WRX - especially one with aftermarket mods. AAMI make their living insurance Corollas and other white shopping trolleys with 4 wheels and a driver with a flat cap. Their model customer is someone aged 52 who has driven an unbroken string of Volvos since they got their L's.

Therefore, I doubt that any performance vehicles made it into the AAMI list of dinged up cars to repair a lot as there are not a lot of them on their books. I suspect that HSV owners usually find themselves talking to one or two specialised brokers who charge them two arms and a knee cap for comprehensive insurance. Especially for those under 25. Hell, if I was the broker, I'd be charging a premium of about 25% of the replacement value. Especially since I went to school with a bloke who managed to write off an amazing string of utes by driving them in a furious and negligent manner - including a hideously drunk and disorderly manner. I know what young blokes do to cars. It's not pretty.

Anyway, I am sure that if Mr Idiot Letter-Writer wrote to Shannon's Car Insurance and asked for their top 10 list of smashed up cars, he'd probably find it replete with fancy cars - and not a Lexus to be seen, as what sort of Lexus driver needs to insure their car with Shannon's?
Badly proofread by Boy on a bike at Saturday, August 26, 2006