God, I must be getting old. Number one's school is running a fete on Sunday and all the kids have to take a cake - and it has to be something that they have baked.

Hell, public education is full of good ideas. Let's give all the kids really bad bowel problems by getting them to eat stuff that other 10 year olds have baked. At least private schools are moer honest about the whole rigmarole - they just tell the mums to go home and start baking. 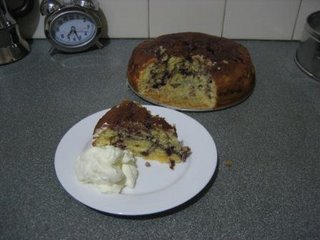 So we spent a few nights poring through Donna Hay cooking magazines in order to try and find a cake recipe that was kid proof. There are some kids that can cook, and others that can't. Number one has trouble making toast. Let's just leave it at that.

I suggested something simple - something so simple that even I could make it, and I can't bake for nuts. The result is shown here on the left - a jam-ripple cake. Yes, it really was very easy to make, and I put most of that down to the Kitchen Aide mix-master thingy. I just poured stuff into the bowl and it pretty much made the cake for me. I haven't worked out how to stick grease-proof paper into a springform tin yet - I think that gives you a good indication of how up on cake baking I am.

This photo was taken 24 hours ago. There is now just a thin sliver of cake left, and I might demolish that before bedtime. This cake has been a big success. Thanks Donna.

Number One of course decided that this cake was not for him, so we had to make another cake. One that was about 40 orders of magnitude more complicated. It is a chocolate mud cake, and it is in the oven right now. It's got 15 minutes to go. Given my luck, I will have to get up at 6am to make a jam-ripple cake because the mud cake will be an unadulterated disaster. I'm not blaming the author (Nat), because if I do, he won't bake any more cakes for us on our birthdays and that would be very sad. But maybe I should blame the author. After all, Nay is a pastry chef at a very flash Sydney restaurant, and he probably turns out mud cakes the way Fosters make beer. What the hell was he thinking when he gave a complete novice like me a recipe that is normally only used by brain-surgeon equivalent cake bakers? If anything, I will be banging on his door at 6am demanding that he turn out a cake pronto.

I guess it doesn't matter if it turns out to be gloopy mess, as we'll just call it chocolate goop and be done with it. Chocolate muck cake instead of mud cake. Kids will eat it. It's also so full of coffee and sugar and chocolate, their little hearts will probably explode after a few bites, so that should take care of any classroom overcrowding issues.

I should mention that this recipe calls for something like 375 grams of butter and 375 grams of sugar. I have no idea how much that is, but it sounds like a pound in the old measures. A pound of butter. My goodness, how many cows does it take to produce a pound of butter? A herd? A dairy? A colostomy? (That sounds good - a colostomy of cows). You mix the two together with about two blocks of cooking chocolate (sorry, that should be two slabs) and a bucketfull of coffee and hot water and stir. And stir. And stir. You're supposed to put the whole thing in the fridge for two hours and pull it out every 15 minutes for another stir.

If you've had anything to do with 10 year old kids, you'll know that 15 minutes is a difficult unit of time for them to grasp. The best way I know how to describe it is "half an episode of The Simpsons". Distraction set in after a few turns of the bowl, and I ended up with the job of finishing the cake.

Just what the hell was wrong with my jam-ripple cake anyway?

Five minutes to go with the cake baking. The moment of truth is fast approaching.
Badly proofread by Boy on a bike at Saturday, August 26, 2006