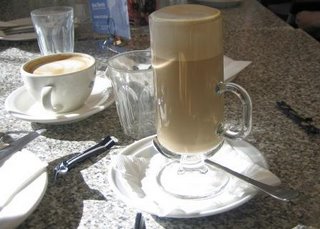 When in Perth recently, we ate at a place called Mediteraneo a few times. At least I think it was called that - I picked up a card from the front desk and when I got home, I found that the card was for Oceanus on the beach. Oceanus is on one side of the building and it is the flash restaurant, and Mediteraneo is on the other side and it is the "cheap" cafe. It's at City Beach.

I have eaten there on a previous trip, and the only reason we ate there is because it is the only eating place on the beach for a few kilometres in each direction. It's not like say Bondi where there are 30 cafes in intense competition and the weak are weeded our pretty quickly. Mediteraneo has a monopoly, and like all monopolists, they are lazy, expensive and useless. Thing Telecom before Optus came along. In fact, continue to think Telstra in this current day and age. A corporate blob.

So what went wrong?

Well for starters, the place seats a lot of people - maybe over 100. On the first visit, there were maybe a dozen diners, but only one bloke serving. For most waiters, that would not be a problem. However, he looked the type that spent more time in front of a mirror checking his hair than time on the floor looking after the paying public. He really should have been in a beauty salon. He was bloody hopeless in a cafe. As it is family owned, I can only presume that he was the idiot relative that had to be given a job of some sort. We ordered stuff that was never delivered. He disappeared into the kitchen for long periods of time to chat to the cook (it has an open kitchen, so we could see him in there yapping, but he didn't bother to look out at us - if he did, he would have seen us waving our arms at him).

We ordered burgers, and given that they cost about $15 each, you'd expect a pretty flash burger. Yes, it was big, and it had a lot in it, but they were not great burgers. They were actually pretty tasteless. The buns were boring and a bit soggy. The meat patty was dull and uninteresting. The salad bits were totally lifeless. There was no interesting and tasty or tangy sauce or chutney or mayonaisse to go with it. It was just a grey, lifeless burger.

The chips that accompanied each burger were large and undercooked. Crispiness is not in their nature. When I say "large", imagine taking a big spud and maybe cutting it into 8 segments. They were not wedges, but they were enormous chips. I love enormous chips if they are crunchy on the outside and fluffy in the middle, but these were just mush all the way through. 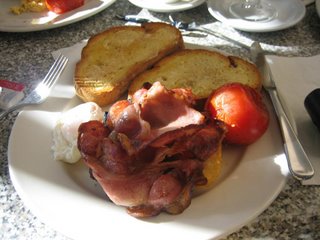 Complete waste of time and money.

I have to do some monkey minding now, so the second episode will have to wait. 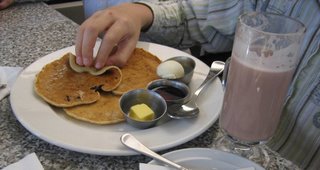