I lost an argument with a car 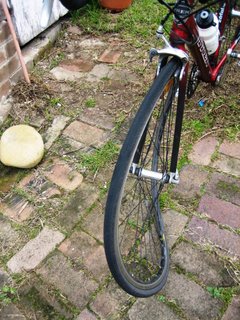 I was coming home from work the other night and I lost an argument with a car at a roundabout. I'm used to people failing to give way to me at roundabouts - it's just a fact of life that a certain percentage of the population are complete dickheads and they'll fail to give way simply because they are in a car (usually a ute or tradesmans van) and you are on a bike. They look at you and then give a sneer that says, "so what are you going to do about it?" and then drive across the intersection or roundabout in front of you, causing a quick grab for the brakes.

In this instance, the bloke looked at me, and I was sure he saw me. He slowed down like he'd seen me, so I went ahead since I had right of way. However, although he was looking, he didn't see me. When I was almost smack bang in front of him, he put his foot down and T-boned me beautifully. He wasn't going that fast, but I was catapulted sideways out of the saddle and thumped into the concrete like a sack of spuds. Thankfully, he then slammed on the brakes and didn't run over me. Also, there was only one other car in the area, so I didn't get run over from behind. 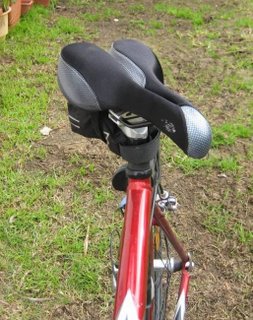 The front wheel was nicely mangled as expected, but what I didn't expect to find was the saddle canted off to one side. It's actually canted to the left, which means I must have been flung off the back of the bike, as that is the only way the saddle could rotate like this.

The bike is now at the shop and I'm waiting to hear if the frame is bent. If so, it is a write off. If not, I probably just need a new wheel and a bit of a tune.

Given that I was hit by a car, I'm in reasonably good shape. Muscle strains all down one side, a sore shoulder and a weak wrist from where I put my hand down to slow my descent to the concrete. A few barked knees and elbows as well. I think the driver was more shaken up than I was. His passenger (possibly daughter) looked totally freaked. I simply got his details, and that of a witness, picked up the bike and carried it the remaining few hundred metres home.

A few pedestrians joined me on the roadside to see if I was ok, and they commented that they couldn't understand how he failed to see me. After all, I have a very bright (and expensive) headlight, wear bright, lary clothing and ride in a position where cars should see me. I guess he was looking for cars coming from his right, didn't see any cars and thought it was safe to proceed. It's funny how the brain processes information.

I have since spent a day visiting a quack for a checkup (the most unsympatheric cow ever to pass through medical school), going to a copshop to give a statement and lugging the bike back to the shop for a once over.

The quack was just hopeless. I explained that I had been hit by a car and was feeling a bit sore and I'd like to be checked out (I don't want to collapse tonight because of internal bleeding or something horrible like that). She took one look at my skinned elbows and made a note on my file (I read it - it said "Fell off bike") and basically tried to boot me out after 1 minute. I almost had to twist her arm to look at my left knee, as it took the impact with the bonnet and it was feeling a touch wobbly. She wiggled my leg a bit and then booted me out.

If I die, you know who to sue.

Frankly, I feel a bit soft about the whole thing. Ok, the crash is the equivalent of climbing onto a filing cabinet and then diving onto a slab of concrete. The impact is going to do some damage, but I've felt this bad after a week of skiing and falling over a lot. I certainly felt worse when I was in the infantry, and we used to go through this sort of punishment several times a day during a two week exercise. If you've ever hit the deck with an M-60 in your arms and then crawled with it, you'll know what I mean. In most places, the ground is not a nice soft lawn. It is hard and lumpy and covered with rocks and sticks and things. I guess you just feel it a lot more at this age.

Visiting the cops was also a bit of a joke. With some trepidation, I made the trek to the Five Dock cop shop - the scene of my last disastrous encouter with the plod. This time they were smart - there was a sign on the door saying that "Due to staff shortages, take your reports and complaints somewhere else".

Ha! Hopefully they are short of staff because they have sacked all the useless sods.

So I treked over to Gladesville instead, only to be told that I should have gone to Belmore instead, as the crash happened outside the Gladesville patch (or LAC - Local Area Command). Frankly, I couldn't give a toss - I should be able to make a report anywhere, and they can sort out the paperwork themselves. I think they took pity on me and decided to take my statement, even though they warned me it could take 2 months for the file to get to the Belmore station! 2 months!! What are we living in - the Middle Ages?

The hilarious thing is that they no longer have forms that you fill in after a prang - the poor old cop has to take down the details in their notebook, and you then sign the notebook, and they then have to type it into their computer system. What a complete joke. The poor old constable was obviously in for an afternoon of paperwork after my visit, so she was not that well tempered, but she put up with me and took my statement. Probably because there was a Sergeant behind her that made her do it. I get the feeling that if the Sergeant was not there, I would have been sent packing.

So I gave my statement, and the nice plod wrote it all out in longhand at the counter (I offered to type it into the system for her, as I am sure it would have taken a lot less time), but no, rules are rules and it all had to be written out in longhand first.

I think I got my streets mixed up, but at least I got an event number, and now I just have to sit around for 2 months until Belmore gets the file. The driver might get a ticket for failing to give way. I said I didn't care - frankly I don't want him to be booked as he was a very nice bloke and he was very sorry and he offered to take me home afterwards. He looked very contrite and I don't think he needs to get slapped with a ticket. Especially since his Falcon looked a bit old and beaten up and I want him to pay for my bike to be fixed and not to spend all his remaining cash on a fine. It's no help to me if the government gets his money.

When the statement was taken, the plod announced, "Well I'm off to lunch!" and that was that. I hobbled out of the copshop and resolved to find where Belmore cop shop is in case I ever need to visit it.

One thing that surprised me is that the cops really don't want to know about crashes anymore. They were almost reluctant to take my report at all. I thought the deal used to be that you had 24 hours to report a crash if someone was injured, or the damage was over $500.

Apparently not anymore. The RTA Accident Reduction Guide tells all:

Rule 287 (3) of the ARR outlines the responsibilities of persons involved in traffic accidents with respects to reporting the incident to the police. The police will attend the accident if:
• A person was killed or injured; or
• There was over $500 damage to property other than the vehicles concerned; or
• One of the parties failed to stop and exchange particulars; or
• One or more of the drivers was reported to be under the influence of alcohol or other drug; or
• One or more vehicle was required to be towed away.

All accident events that were attended by police and where a person was killed or injured or at least one motor vehicle was towed away are entered on the RTA’s Traffic Accident Database System (TADS). The data is checked and transferred from COPS in a weekly basis. Other police-attended accidents (referred to as “non-towaway accidents”) may also be transferred onto TADS, but these are filtered out in any accident data reporting. Self reported accidents are not recorded on TADS. When analysing accident data as a part of an AIP, it is important to acknowledge that the accident data obtained from TADS does not contain self-reported or non-towaway accident events.

So what this tells me is that no one is going to care about my crash. However, I did foul things up by telling the plod that I had to carry my bike away, which technically means it was "towed". That should force them to investigate what happened.

My hands now hurt from just typing this bit up. I think I'm going to be a bit lame for a while.

I got a good reaction from Renegade, my bike shop. They took one look at the bike when I carried it in and asked all sorts of questions. The only output I really got from the bike shop was "You'll be really sore tomorrow".

They were right.
Badly proofread by Boy on a bike at Thursday, August 03, 2006