Getting blown up cars right

I commented a while ago on the movie "Jarhead" and an annoying scene where they patrol through a valley of burnt out cars, trucks, buses etc. Supposedly they have been attacked by aircraft (presumably A-10 warthogs) and have been generally cluster bombed and strafed with 30mm cannon.

Cars that have been shot at and blown up generally have either big holes in them or chunks missing here, there and everywhere. They just don't burn - unless you are dropping napalm. The thing is, every car, bus, truck etc is intact, but black. 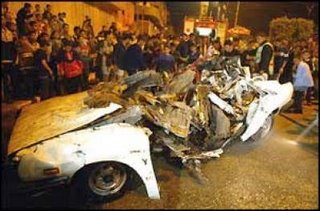 This came to mind when I was happened to find some pics of cars that have been attacked from the air - no, not by shitting seagulls or pigeons - by attack aircraft or helicopter gunships.

Now I might be wrong here, as it is a while since I watched Jarhead, but I seem to remember that a lot of the cars and buses had intact windows. I would have thought that the odd exploding bomb would push out enough of a blast wave to break every window in the vicinity.

The other thing is that the vehicles seemed to be remarkably undented. 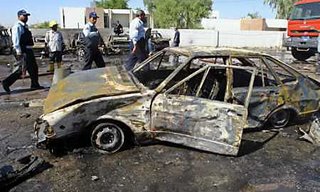 At the very least, I'd expect some of them to be pretty banged up.

The really interesting thing though is why would every vehicle in that valley be burnt out? Look at the car on top - it has been hit by a missile, but it has not caught fire. Maybe it ran on diesel - who knows. Maybe once one vehicle goes up, there's enough heat and flame to set off the next one and so on and so on.


I just wish Hollywood would try harder to get it right. It's not like they are short of money, and digital special effects these days can do a lot of things.
Badly proofread by Boy on a bike at Sunday, August 13, 2006