I was trying to think up a witty heading for this article, but frankly the witty parts of the brain are just not firing at the moment. I thought of things like "finding good coffee in Perth is like finding a wog with a sensible car", or "finding good coffee in Perth is like looking for a bogan without a mullet". They really didn't grab me. Let's just say that it is hard. Difficult. A bit of a quest.

On our last day in town, we breakfasted at a cafe in Mount Street - just next to the CBD. I cannot recall the name. I know exactly where it is, as it used to be owned and run by a person that I will call "Hygiene Boy". I'm not sure if I have spelt Hygiene correctly - the spell checker is on the blink, so you'll just have to put up with my dodgy typing.

Anyway, the cafe is not as it once was. Hygiene Boy is gone, and the place has had a bit of a makeover. Not much, but it has new owners. That much was made clear by the gushing article from some local rag that they had cut out, framed and left on the counter for all to read. The gushing article mentioned two owners, and neither of them looked like Hygiene Boy.

The gushing article was written by someone who obviously had an enormous hard-on for the cafe. God knows what did it for them - I couldn't see it. I read the article twice, and I was hard pressed to recognise it as the place that I was standing in.

OK, where do I start? 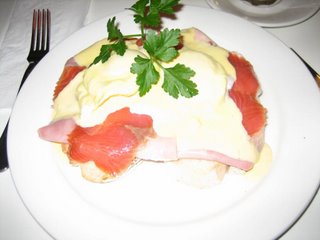 Well, for starters I ordered egg benedict with smoked salmon. I noticed that they had salmon in the cabinet next to the till, so I knew they could serve it - it just wasn't on the menu. Now the standard fare on the menu came with ham, and I kind of assumed that the cook would have had enough experience of eating out that eggs benedict come with salmon OR ham.

The meal came out and there were the muffins on the bottom, covered with some slices of ham, which were covered in sliced of smoked salmon, which then had the eggs on top and the whole lot was smothered with hollandaise.

Fuck, I was furious. However, I was monkey minding when the plate was plonked down, so by the time I actually had a look and noticed the disaster on my plate, the waitress had shot through like a Bondi tram. She hadn't shot through very far, but the staff were the type that had the ability to stand 12 feet away and not noticed you. You know the type.

I was mad enough to pull out the bits of ham and throw them onto a side plate. I don't know why I was so polite - I should have dumped them on the table top instead. Maybe making a proper mess would have sent the appropriate message.

God some people are thick. Or they don't get out very much. 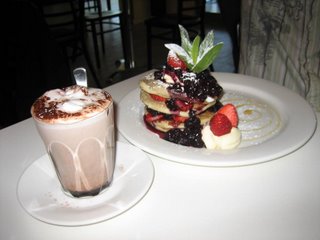 Apart from that little disaster, the other meals were not too bad. I was quite impressed with the pancake stack that the little monster had, but he declared partway through that "the pancakes in Dunsborough were much better", and after trying them, I had to agree. It was all front and no substance. And frankly, mascarpone does not go well with pancakes. Pancakes are more your King Island Double Cream kind of number. I love mascarpone in Tiramasu, where the sourness balances the sweetness of the biscuits etc, but it is just a dud on pancakes. Maybe my tastebuds are just too attuned to having lemon and sugar on pancakes. Whatever.

The place does have one interesting gimmick, and that is to write the names of their regulars on the wall along with their coffee order. Or should I say paint their names. The wall is half covered in a wierd script that only I could decipher at first - like "Sandy - SB, Jamie - TMAC, Suzie - SBDEC" which of course are a short black, a tall macchiato and a short black decaf.

Another thing - why is Perth the only city on the planet that can offer a macchiato in three different styles - short, regular and long? I have never heard of these things outside of Perth. I reckon that when the coffee craze started, some itinerant barrista landed a gig in Perth making coffee at some flash establishment. He got thoroughly stoned one night and decided to play a joke on the citizens of Perth by inventing two non-existent types of coffee - the long macchiato and the regular macchiato. (A long macchiato I have discovered is something like a latte, only taller). The dopey coffee makers of Perth, not knowing any better, copied this prankster until every cafe in the city (nay, the state) was offering these abominations. I bet there is a barrista somewhere laughing himself silly.

He probably did it to get back at someone that told him that he needed to put vegemite behind his ears to ward off the drop bears. To me, the tall macchiato can only be understood if you understand the prank behind vegemite and drop bears. It sounds a lot like revenge to me.

And it has been a very good revenge. Perth is populated by idiots who continue to order this non-existant beverage. 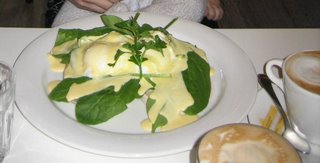 Anyway, after a crap breakfast, I front up at the till to pay the bill. The total came to over $50. I was gobsmacked. Partly because none of the menus mention prices, which is a good thing as I would not have eaten there if I had known that my eggs were going to cost about $18. And of course they did not give me a bill either - they just rang up random amounts on the till and gave me a bill. I think I was too stunned at the ham and fish thing to be able to respond to such highway robbery. I just paid up and walked out shaking my head.

My only hope is that when we are back in town at Xmas for a few weddings that the place has gone belly-up and someone else is having a go at running the cafe.

So long as it is not back in the hands of Hygeine Boy.
Badly proofread by Boy on a bike at Saturday, August 05, 2006