Had another early start this morning. I had better luck photographing the rising sun due to a bit of cloud cover. Here's where I try to abide by Cav's rules of photography - except I have stuffed up the rule of thirds. Again. 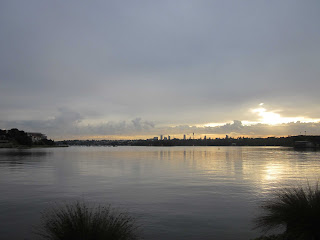 Same scene, but all wrong. It's a bit tricky taking photographs over one shoulder whilst changing gears with the other hand and accelerating. I'll get the hang of it one day. 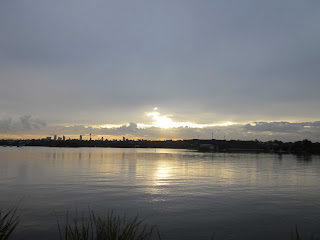 Didn't see many other cyclists at sparrow's fart. 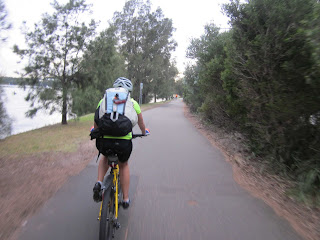 Lovely morning for a ride though, if a tad warm. 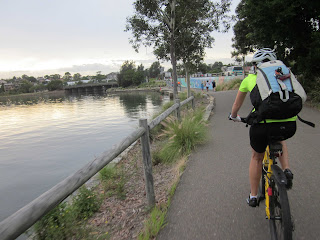 Hardly any bikes on the bridge either. 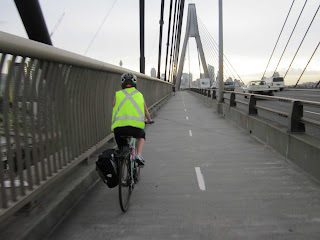 The bloke at the front here was a bad aggressive for my liking. I was sitting behind a slow moving taxi as we approached a corner because I knew that trying to pass that taxi would be a stupid move. Dopey here went down the outside, and sure enough, the taxi went wide as it went around the corner and Mr Aggressive was almost smeared between it and the concrete kerb. Sometimes, cyclists are our own worst enemies. The bloke behind him was little better - except that he was Mr Wobbles. I pride myself on riding with almost no perceptible wiggle in my body or bike - I am as erect as a Guardsman on parade (without trying to be rude). This bloke managed to weave from one side of the bike path to the other with each downstroke of his pedals. And I don't mean just one lane - I mean the entire path! 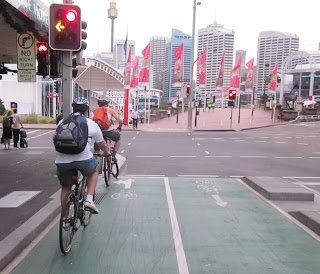 A storm came in around lunchtime. We had hail at home - stones big enough to convince the neighbours to run outside and cover their cars with blankets. I missed that - it just rained heavily when I was riding home. Although the flash went off when I took this photo, it was so dark and gloomy, it still came out blurred. It was almost like riding at night. 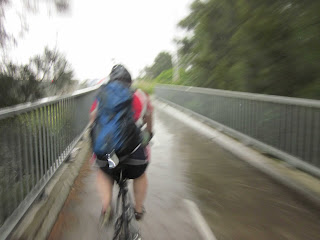 I was utterly saturated before I had even left the CBD. It was one of those days to be thankful for lycra - otherwise, I'd be sitting here with my inner thighs covered in rash ointment. 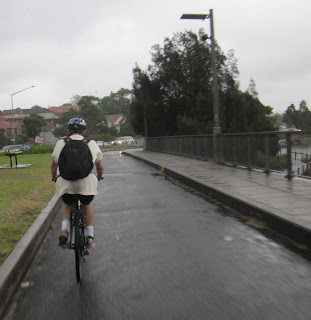 Welcome back BOAB.
Has your brother gone home?
He wuz really into the political scene, you know, statistics and everything....