A trio doing the overtaking thing first thing in the morning. The woman at the back in black was in front - then the guy in green overtook her, then the bloke right up the front overtook both of them. Then I overtook the lot. 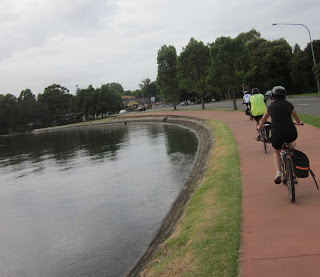 The usual game of dodgems around the Ashfield section of the Bay Run - the path is a narrow strip of badly lady asphalt that's shared by gazillions of runners, dogs, prams, bikes and who knows what. At times you veer to the right.... 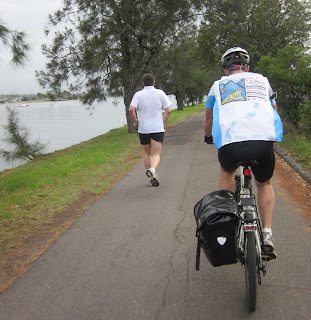 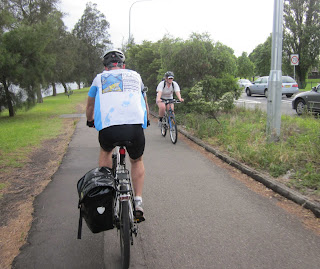 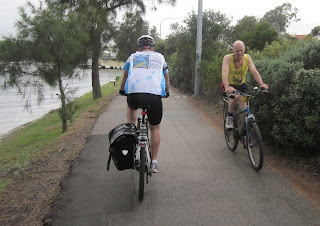 Bozo here jumped the red light. Just down the hill, you can see a pair in fluoro vests. One of them was picking up planks of wood. Just as Bozo reached them, plank guy swung around and almost collected bozo in the guts - only a rapid bit of swerving saved him. If there had been a car alongside, I would have been calling an ambulance. It's bad karma to jump red lights. 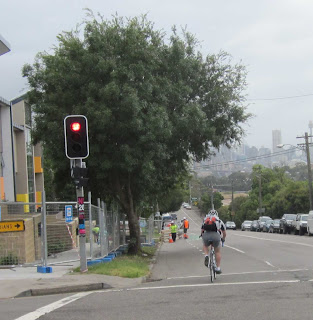 A pair toodling in at an easy pace. 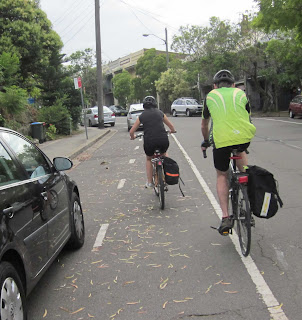 A pair going for it on the Pyrmont Bridge. 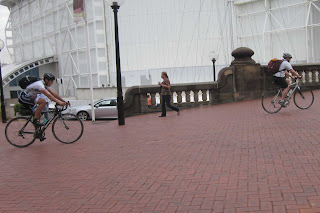 Me and this bloke watching the pedestrians, thinking "How many of these muppets are going to cross the road and then start walking straight up the bike path?" Answer - at least half a dozen. 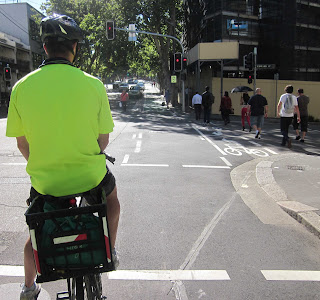 A couple of kids out for a spin around the Bay. 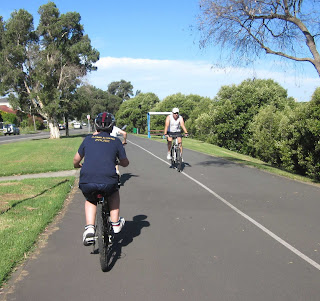 It was quite warm this arvo - there was a strong, dry wind in my face all the way home, and I think I have cooked my throat. Either that, or the Thai salad I had for lunch has destroyed my body. I followed the advice of John and traipsed down town to Thanon Khao San for lunch. It was a great experience - John knows what he's blogging about when it comes to food. I asked for the papaya salad to be spicy. Bugger me if that wasn't a big mistake. I was crying before I'd eaten half of it, and thought I was going to faint at one point. Being an idiot, I kept on going until there was nothing left. Strangely though, I didn't sweat at all. In fact I didn't sweat on the way home either. Not a drop. I think that salad fried all my sweat glands.
The desserts at Thanon Khao San were excellent - I'll be back. And it was cheap too! And the service was great! All that was missing was a ping-pong show.
Badly proofread by Boy on a bike at Friday, December 17, 2010