More on the collapse of the Green dream

What is it with media pundits and their inability to do simple sums? Here is Cheryl Kernot in the SMH today:

The Greens recorded a very marginal increase in their base vote and lost a seat in the upper house, dampening the hype that began with the election of Adam Bandt in the federal seat of Melbourne.

Yes Cheryl, they did record a marginal increase in their base vote - they went from 297931 in 2006 to 302950 in 2010. However, almost none of that increase appeared in the 4 seats that were hyped as going Green - Brunswick, Melbourne, Richmond and Prahran. They actually shed an aggregate of 2147 primary votes in these key seats.
The big winner in all of them was apathy. The donkey vote has remained stable since 1999. What is clear though is that more and more Victorians just aren't energised to get out of bed and vote in state elections anymore - and this is particularly true of Labor voters. Instead of swinging to the Liberals, they just stayed in bed. Why make the effort to spoil your ballot when you can sleep in instead?
Brunswick - the Green vote came of a low base in 1999, almost quadrupled by 2006 to 9890 and then collapsed like a souffle in 2010 to 8062. Their share of the primary vote went up slightly because the Labor vote imploded. It's interesting to note though that in this seat, much of the Green vote appears to have come from the Libs, not Labor. There goes the notion that Labor party voters are drifting Green. 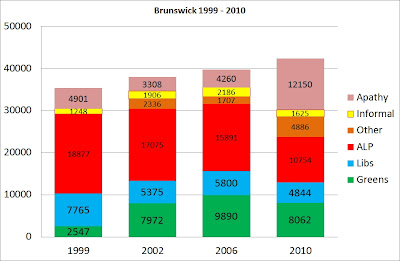 Melbourne - the Greens didn't run a candidate in 1999, but have steadily increased their vote since then. This was the only one of the 4 key seats where their vote increased between 2006 and 2010. In this seat, the increase in the Green vote nicely matches the decline in the Labor vote. In this instance, we could say that Labor voters have gone Green. 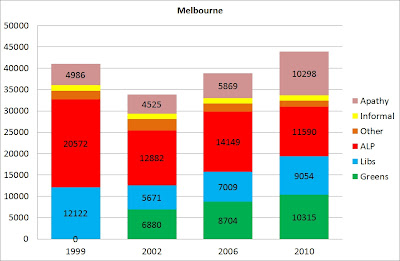 Richmond - the Green highwater mark was 2002, and they have gone backwards ever since. Their primary vote is 18% down on 2002. Labor has shed over 9000 primary votes in that time, but it appears none have gone to the Greens - most have joined the party of apathy. Again, the idea that Labor voters are going Green has been shown to be a myth. 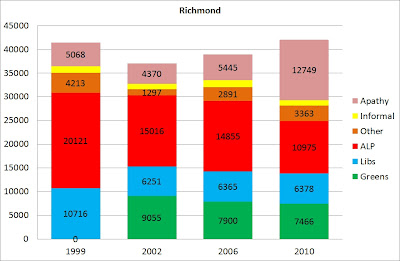 Prahran - this has gone from Labor to Liberal. The Green vote dropped 24% from 2006. The Labor vote collapsed, dropping 36%. Instead of those Labor voters leaking to the Greens, they have charged into the apathetic camp. There is no support here for the idea of Labor voters turning Green. Why did the Libs win Prahran? Their primary vote was lower than it was in 2002 and 2006 - but as you can see, the Labor vote evaporated. 4200 Labor voters stayed in bed, as did 1500 Greens. The loss of those primary votes and the Green preferences was enough to give the seat to the Libs. Questions have to be asked - why did all those Labor voters stay home? What put them off so much? 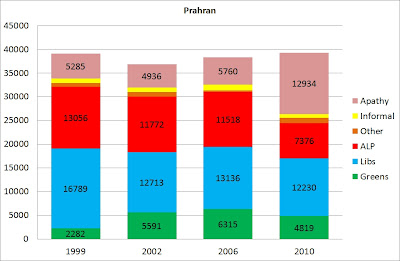 Here is a seat the Greens will never win - Broadmeadows. The reason I picked this seat is that I know where it is - when you drive from Sydney to Melbourne, you drive through it on the outskirts. It's always looked like an outer suburban shit hole to me. That's because it has a big Ford factory. Everyone knows Fords are crap. I had no idea until now that the member was one John Brumby. Fancy that. 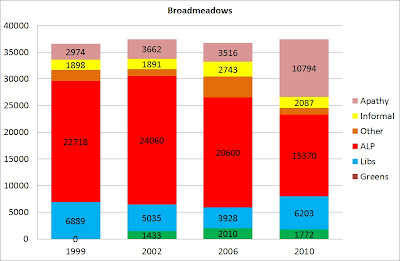 Brumby's vote has dropped by about a third from 2006, but he still romped home. Note that the Green vote dropped by about 12% from the last election. Clearly, Labor voters on the fringe are not defecting to the Greens. My take is that they are over Labor, but only a very small number will swap to the Libs - but none will go Green. Instead, they just stay at home and do nothing.
OK, one last chart - this one from Derrimut, which I guess is a sort of mid-outer western suburb. As I have no idea what Melbourne geography is like, I am going to guess that this is classic battler territory. Mexicans - feel free to correct me. 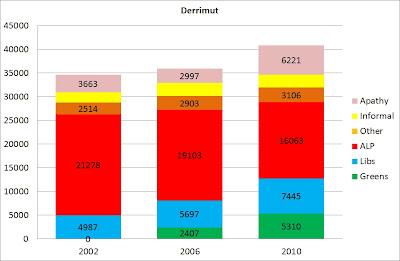 This seat didn't exist in 1999, so we only have 3 elections to go on. Notice that the Greens didn't run a candidate in 2002 - it's only recently that they have developed to the point where the can run someone in most seats. That fact alone - putting up a candidate - is going to push up their total vote. If you didn't run someone last time, you got zero votes. The increase in the total number of Green votes across the state does not necessarily mean that their candidates are getting more popular - it may just mean they are running more candidates.
If I ran 10 candidates at the last election and they got 10 votes each, and I ran 20 at this election and they got 6 votes each, then I will get more votes in total - even if the popularity of my party sank like a stone.
What all this says to me can be summarised as follows:
Badly proofread by Boy on a bike at Thursday, December 02, 2010

When are we going to get back to looking at arses on bikes and SUVs trying to wipe you out bigboy?