Some graphs to illustrate the latest shaky Green vote

Thanks Shadowlands for the shameless plug. You might get a bottle of wine out of it.
Here are two graphs that show that any claims by the Greens that their vote "increased" in Victoria are based on shaky ground. As we all know, there are lies, damned lies and statistics. Well, there are also voting tallies, damned voting tallies and Green claims to electoral triumph. Given enough numbers, you can find one that paints a favourable picture. I don't blame the Greens for spinning the numbers to suit their narrative - I just don't want them to paint themselves as all holier than thou and more moral than the other parties when they do so.
I'm here to keep the bastards honest - ha ha ha ha! The irony of that statement kills me.
I chose Brunswick from the three electorates in question for no other reason than it was the first on the list.
The first graph shows the percentage of first preference votes that each party got. The Liberals and Greens both went backwards slightly, but Labor tanked. Other parties - such as the Sex Party - scooped a much bigger share of the first preferences than 2006. So in terms of the share of first preferences, the Greens went slightly backwards - they did not "improve". 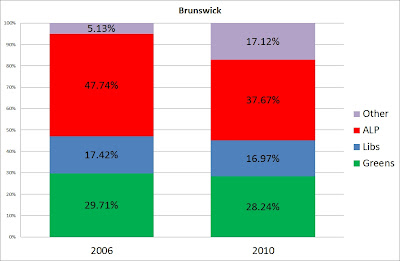 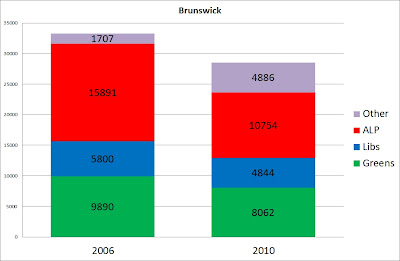 So what you could say in Brunswick is that the Libs did least bad in protecting their (small) primary vote, the Greens did next least bad, and Labor collapsed like a bag of shit - but still scored the most first preferences and went on to hold the seat based on Liberal preference flows.
Again, the Greens can't use these numbers to claim an "improvement" in their vote. 19% of their core voting base disappeared - and they discovered that their good results in the past have all been at the mercy of the Liberal Party.
If I was Tony Abbott, I'd be visiting Adam Bandt and reminding him that he serves in parliament at Tony's whim. If Abbott wants him out, all he has to do is ask the Victorian Libs to preference him last - in that case, Bandt will be a one term member. Abbott has him by the balls. I'd be squeezing him hard by now.
Badly proofread by Boy on a bike at Wednesday, December 01, 2010