We had quite a storm come through on Sunday afternoon. In one direction, the sky was clear and blue. Out west though, it was black and awful. It rained buckets for a few hours, and although it cleared up overnight, today was windy as hell. It was one of those days where I had to lean over more than usual when standing at red lights in case a gust knocked me over the other way - that would be embarrassing and painful. The city buildings cause the wind to swirl in all directions, so you might spend the first 1/3 of a block belting along with a fast tailwind, then get slammed sideways for the next 1/3, then spend the last 1/3 gasping into an awful headwind.
The tide was right up this morning - higher than I have ever seen it. Storm surge I suppose. 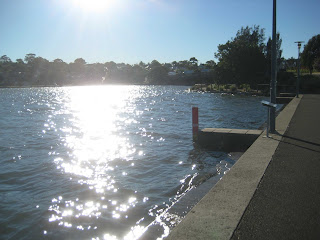 Come afternoon though, it was way lower than usual. 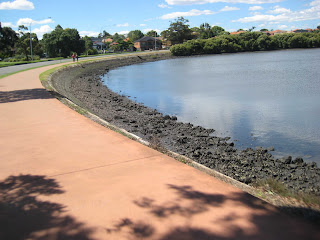 Badly taken photo as I battle gusty headwinds on a climb. Nice shoes though, and a cute pannier. 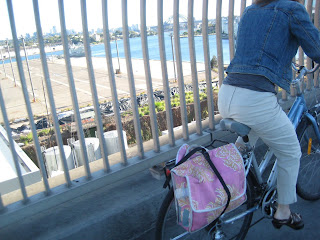 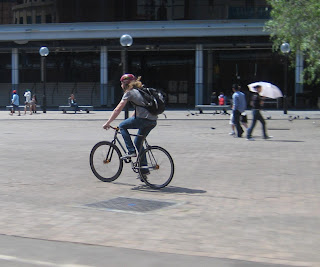 Part of the Panthers Triathlon team. I caught them at this set of lights, and expected that this was the last I'd see of them. However, only one of them had any idea where he was going, so they took it "relatively" easy - I managed to stick with them for a while. 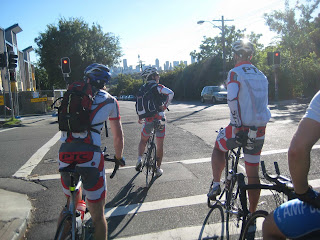 When we got into town and were waiting at another light, I asked one if he came in this way often. His response was that he'd never do it again - he valued his laps too much. Or maybe he said life - it was hard to understand him. 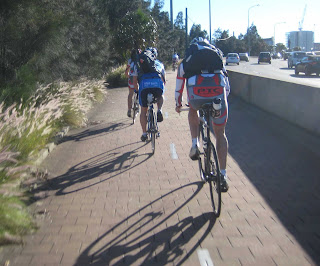 I did it the easy way on the way home - found another cyclist and sat on his bum as he pushed into the 40-60km/h headwinds. It was gusting up to 67km/h - that's 40mph in yankspeak. I normally sail down the big hill on my trip home at a bit over 60km/h without even trying - just coasting. Today, I was going hard at the pedals and only touched 45km/h for a brief instant before the speedo rapidly fell back to 30. 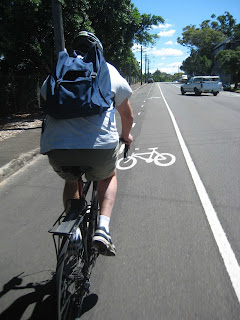 Something blew into one eye on the way home, so I'm half squinting at the screen because it bloody hurts to keep that eye open. I also became a helmet convert today - as I was rounding the Bay, the wind caught a fairly thick branch as I went under a tree and it blew down and smashed me on the helmet. It was a pretty hard blow - enough to give me a bad case of the wobbles - so much so that I almost mowed down a pedestrian whilst recovering. If I wasn't wearing the skid lid, I reckon the force of the blow on my naked scone would have taken me down, and hard. I'd be sitting here with stitches in my scalp if not for the helmet.
Badly proofread by Boy on a bike at Monday, December 20, 2010

Happy Christmas from the UK, I enjoy reading your bicycle based shenanigans, long may it continue.

I lived on that harbour shore for over 10 yrs - Those are Christmas tides. Happens every year at this time.

BTW, Best of the Season to you and yours, BoB!