A conga line of - somethings.

Tandems - never, ever see them, except for days like Sunday. Then, you see heaps of them. 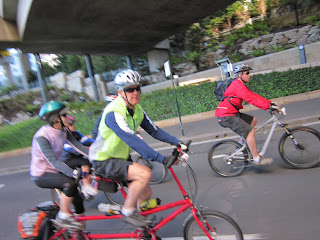 That grey building in the background that looks like a spaceship from Star Wars had a bar that was full of people partying on at 0730 on Sunday morning. Half their luck. To be that young again, when staying awake all night was possible. 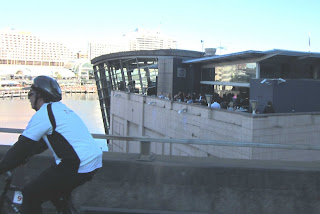 Stopping to admire the view of Darling Harbour. 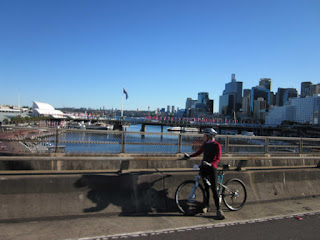 Out of the darkness and shadows cast by massive apartment blocks looms the spires of the ANZAC bridge. Yes, it really was cold and dark and gloomy down there in the depths. 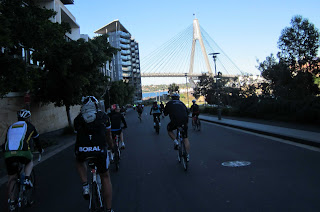 Lilyfield Rd - looks a bit different to my first photo in Part 1. Hordes of bikes. Just hordes. And all crawling up the hill too. Since I climb this twice a day, I got sick of crawling after a while, changed up a few cogs and just blasted past most of them. Some were so puffed, they had hopped off to push. I was out of the saddle and just going for it. There are times when crawling just feels like death. 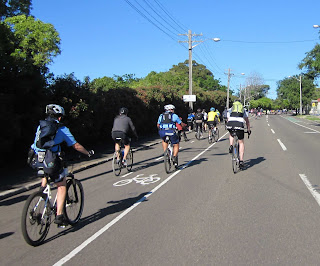 Yeah - traffic control in 9mm form. Without wanting to be silly, this bike cop was a bit.....porky. You'd think that someone who worked on a bike would be a bit leaner and less rotund. 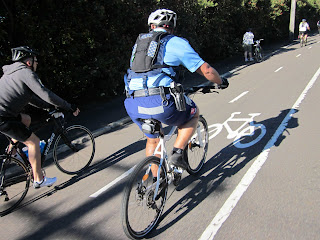 Not that I mind chunky cops. As I was heading towards the start and passing the Pyrmont Hotel, a drunken patron tried to stagger onto the road just as I hit the corner at speed. The alert (and large) cop standing at that corner grabbed the bloke by the collar and practically lifted him off the ground as he jerked him back a foot or so out of my way. I was too stunned to yell out "thanks" as I shot by.
The "cyclocross" part of the course. Because of the density of the crowds, we had to dismount and walk across this rusty old bridge. 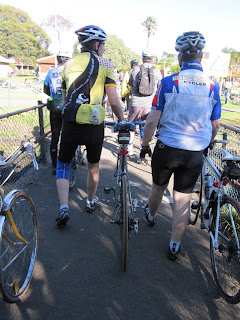 Ladibug - I think they were the Liverpool Anesthetic Department bike user group. Neat. I like how the bloke on the right has his camera slung over his back. 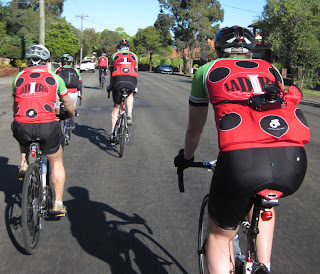