Sunday was Spring Cycle - a day when well over 10,000 cyclists brave Sydney's roads (and weather) for a ride from North Sydney to Homebush Olympic Park. You can do a variety of rides, depending on your fitness level etc. I opted for the full length ride of 50km - that became 80km once you add on getting to the start line and then getting home. Entry is $60.
After getting caught in the crowds the year before last, I vowed to get to the start when the "intermediate" group was supposed to take off. Silly me - I left home at least 45 minutes too late for that. More on that later.
At 6.30am, Lilyfield Rd was deserted, apart from a cold, bored cop standing at the lights waiting for the action to start. (He's not in the photo). 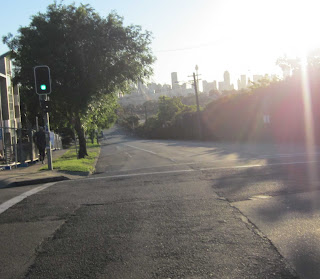 When I got to the end of Lilyfield Rd, the first of the fast movers were appearing. They must have started on the dot of 0630. I was still half an hour away from the start. 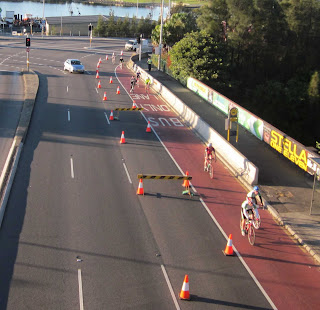 As I crossed the ANZAC Bridge, there were more early movers on the old bridge below me.

Even more appeared on the expressway as I hit the edge of town. 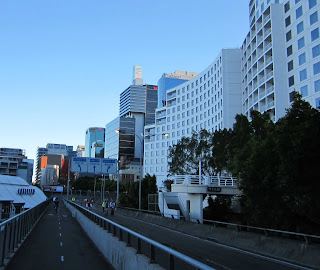 Along the edge of Barangaroo, there were hordes of cyclists - some yelling at me that I was going the wrong way. 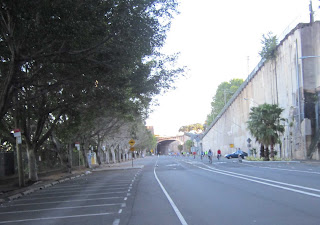 I really had to hand it to the parents that towed their kids for the entire 50km - like the little girl in the middle on the pink bike. 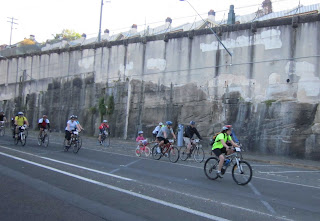 Check out the rivets on that bridge. 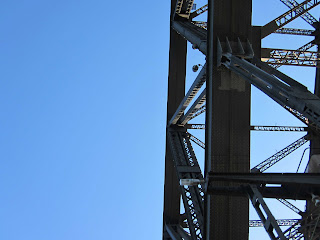 I have no idea why she put her leg out - I think she was that much of an amateur, she was losing her balance! I was to strike lots more like that before the day was out. 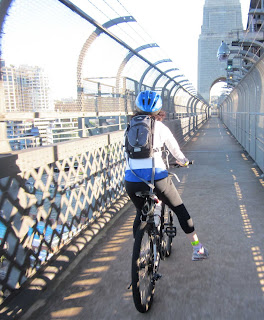 Through the rails is the blue of the pool below Luna Park. I used to swim there when I lived over this way. My bike temp gauge was reading 12 degrees - and there were people doing laps in the pool. I was never that keen on swimming - doing laps before 0700 in Sunday when it's freezing. 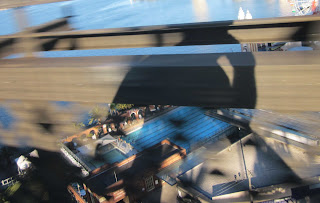 Then the dreaded stairs to get off the Harbour Bridge. 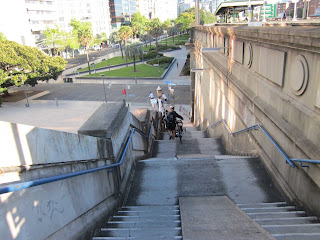 And now for the next installment....
Badly proofread by Boy on a bike at Monday, October 18, 2010

Leg out? She was doing the hokey-pokey....