Sheesh, it's almost a week since I finished the ride, and I'm only just getting around to putting the last photos up. It's been that kind of week.
Here's the arch at the finish line. A welcome site after 70km of stop-start-stop-start-overtake-brake etc etc. I got in trouble for riding after passing under this - there was one small sign somewhere telling us to dismount and walk, and pretty much everyone rode past it without seeing it. There was an old harridan off to the right who yelled at us to walk - it turned out she was handing out medals to the finishers, but there were plenty of people like me who were so annoyed at her behaviour that we kept on going and left her to her pile of medals. I heard her say to an offsider later on "Why isn't anyone collecting their medals?" Duh - because you were screaming at them and completely shitting them after they'd been riding for 3-4 hours. 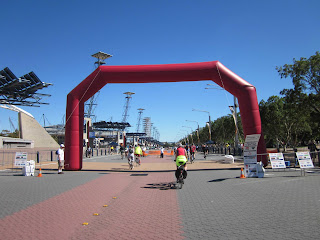 The fountain and fire thing from the opening of the 2000 games. A few years ago, the ride was run on a day when the temp was in the 30s. I was so hot at the end, I rode straight under this fountain to cool off. The water coming out of it was arctic. 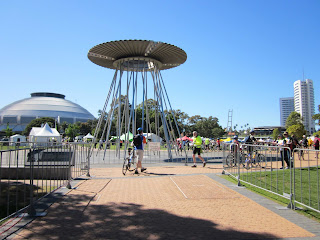 The most important thing post-ride: fuel. The bacon and egg roll tent was doing a roaring trade - and they were very tasty. Inhaled one and a small bottle of Coke in under a minute. After that, i was ready to push home. 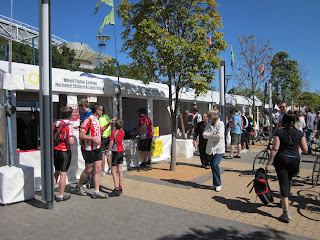 There was a wide selection of munchies to suit all tastes. Nice one. 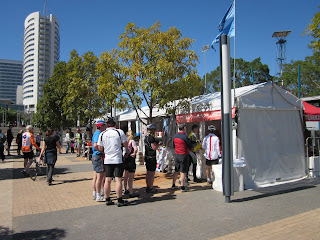 The ride home - it went a lot faster, as people were dispersing in all directions instead of clogging up one road, and a lot caught the train home. 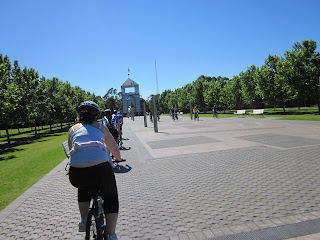 Crossing the stream in Concord - there were still plenty of people heading west as I headed home. 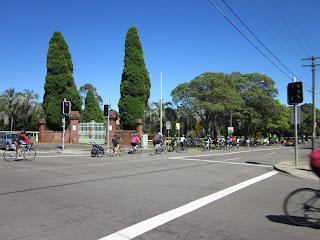 And that was it for another year.
Biggest lesson for next year - be at the start line at 0630! Get going before the crowds!
Badly proofread by Boy on a bike at Friday, October 22, 2010