Lots of people caught the train to North Sydney, so the crowds really picked up at that point. Riding to the start line became a real chore, with me stuck in traffic barely able to crawl up a shallow rise at 15km/h. 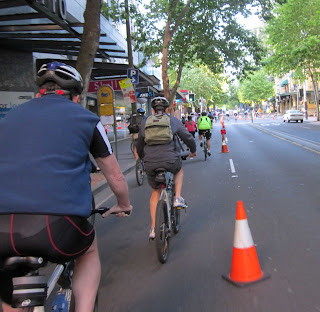 This recumbent was an interesting bike, with an internal hub for gears and lots of really low gears. I doubt the wisdom though of dressing in black in something so low to the ground (and invisible to drivers). 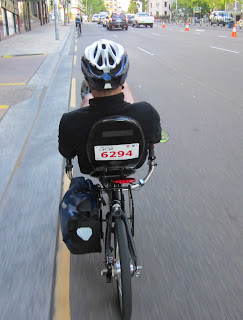 Don't see many cyclists in purple. 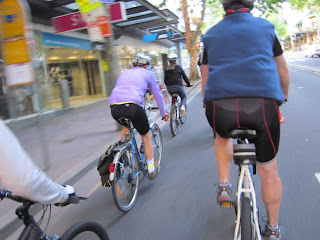 The start line - it's way off in the distance. It took me 15 minutes to get from where I joined the queue to the actual start. Very boring. They were letting packs of about 150 go at a time, and leaving lots of time between them. 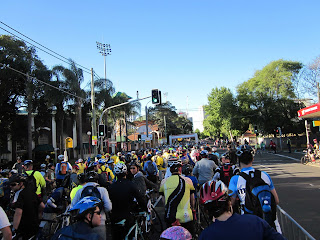 At last - the start, with nothing out in front. We were held here for several minutes to let the group in front get away. I caught the rear of that group within a kilometre or so. There were some very slow riders out yesterday. 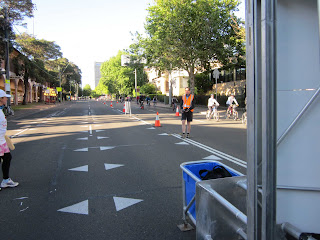 The toll gates on the Harbour Bridge - and a sign "do not stop". That was my motto for the day - just keep going, and don't stop. 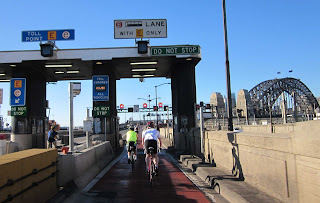 Lot's of people did stop though on the bridge for photos. Plenty also stopped for flat tyres. I'd see dozens of people changing flats over the next few hours. A big risk was damage from collisions, like getting a pedal caught in someone's spokes. There were a lot of hopeless cyclists weaving to and fro, which is not good when in a tight pack. 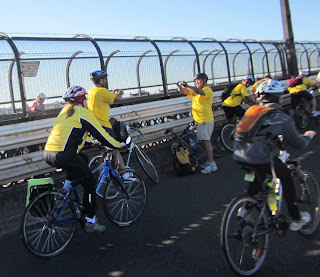 40km/h speed limit - I wish. There was a stiff headwind blowing, so I was happy to cross the bridge at 25km/h. That made me one of the fastest people in my group! 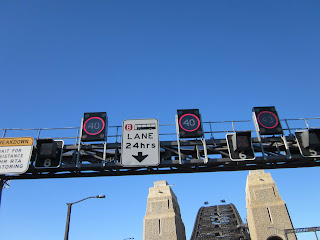 Onto the bridge proper, with the two eastern lanes closed to traffic. The expansion joints in the road are a total menace. 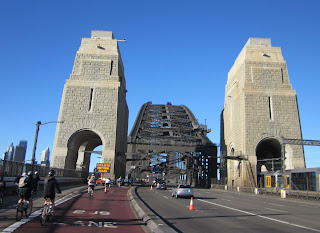 How nice to have a big strip of concrete between us and that bus. 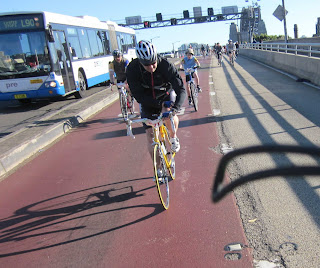