I dropped into the new Westfield shopping centre in the Pitt St mall today in order to try a hamburger from Charlie & Co. I was quite intrigued at the thought of an $18 hamburger. That's not a hamburger meal - that's just a hamburger. A hamburger with chips and aioli plus a drink would set you back nearly $30 - and quite a few people were forking out that much. Not me - I just went with the burger. They don't sell soft drinks, which annoyed me - I like a Coke with a burger.
It's a very nicely set up operation on the fifth floor - I stood in the queue for nearly 40 minutes until I got to place my order, and in that time, I watched a lot of burgers being cooked and put together through a glass screen. Plenty of other patrons were similarly impressed - the chefs were photographed an awful lot. Thankfully, they had a woman who had one job - tell people as they joined the queue that there would be a long wait. I didn't see anyone leave the queue - obviously a lot of people had read a good review about the place, and wanted to see what all the fuss was about. 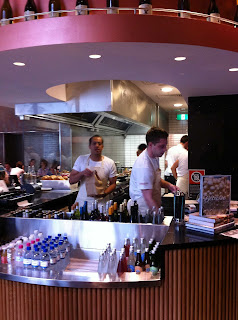 I finally got my burger - fifty minutes after joining the queue. It took another 10 to cook it after ordering. It came in a beautiful box and bag - the presentation was excellent. 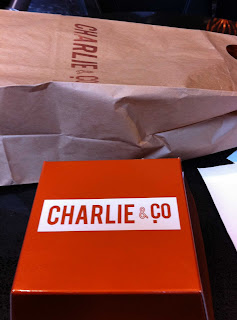 The burger was not that big - if you think an $18 burger should be the size of a Whopper, think again. I think the best way to describe it is "polite". Not petite - polite. It wouldn't leave you feeling bloated and horrible and farty afterwards. It was also a convenient size to hold, and it was easy to eat as it wasn't 130% larger than my mouth. 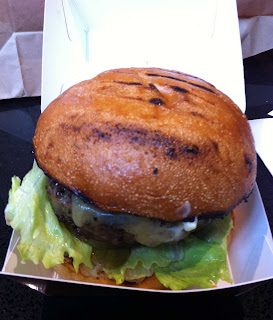 How was it?
The bun was very good - I wasn't covered in flour and crumbs afterwards. It was nicely toasted.
The meat was great - I went with wagyu. It wasn't as juicy as I expected, but it was very tasty.
The beetroot relish was a revelation, and the pickle was superb. I know we're all used to thick slabs of beetroot on our burgers, and McDonalds pickles. These were nothing like anything I have ever had on a burger before. I know it's hard to get excited about a pickle, but I got excited about this pickle.
Will I go back?
Definitely - but not that often! And next time, I'll go early. None of this arriving a bit after noon and joining an enormous queue.
This got me thinking - there were a lot of people queuing for an expensive burger, and a hell of a lot more walking around a very expensive shopping centre, looking like they were going to buy things.
Good thing I found this table of incomes and income tax in The Aus today. 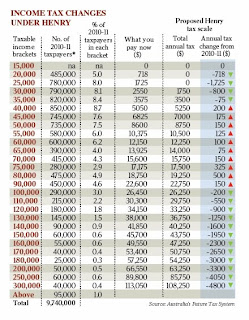 Here's the thing - there are not a huge number of people reporting large incomes to the tax man. Out of our population of 22 million (or whatever), 9.7 million pay income tax. Not that many are making what I'd call a big income - $150,000 plus. You're talking 4% or so of the taxpaying population, or less than 2% of the population at large.
My point is this - where are all these people getting the disposable income to happily buy $18 wagyu burgers?
Badly proofread by Boy on a bike at Friday, October 29, 2010

Queued here for 10 minutes on Thursday and gave up after I was told it'd be another 20 minutes before I got my burger. I was ravenous and gave up and made do with a kebab down at Hunter Connection. Will I be back for a burger? Bloody oath. There are at least four on the menu I want to try

I may have paid that much for a hamburger, but it came with chips,a nice decor; and great coffee.

I haven't been back.

Howard was right - we never had it so good.