I was wrecked on Monday - not that I did anything of note over the weekend. It was just one of those days where you wake up shattered. I was in such a feeble and horrible state, I figured that I had to ride into work just in order to wake up. If I caught the bus, I'd have jumped off after a few minutes and gone home to bed. The ride in did help, but I was slow as a wet week. Worse than that, I was spotted being slow. There was a rude text message on my phone when I got to work, asking if I was normally that sluggish.
The ride didn't wake me up that much - I fell asleep in a meeting during the morning. Twice. Thankfully, there was no snoring. I think. 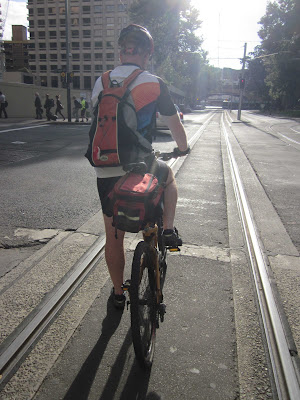 A line of three head into town this morning. I would have been content to sit on their tails - I was still not in great shape - but they were hubbards! I managed to keep my eagerness under control for about 10 seconds, then I took them out one by one. I am just not geared for cruising. It's flat out....until I blow a gasket. 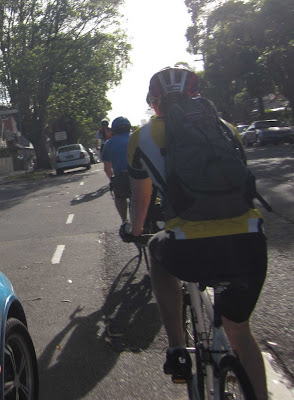 Two different styles - the guy in front has all the good gear on, whilst the bloke behind is going home wearing a business shirt. Hey, if you don't have far to go - why not? 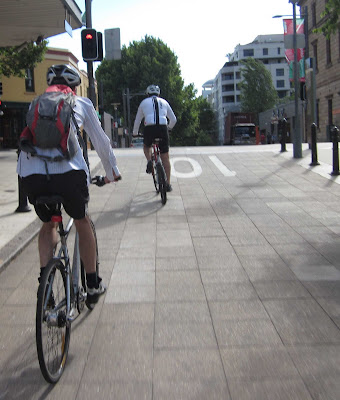 Cruising through Pyrmont on a beautiful morning. 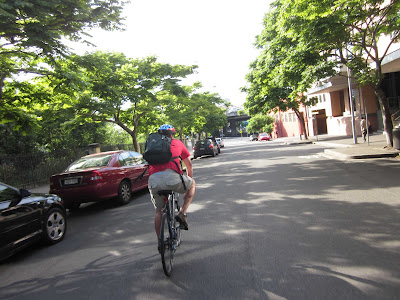 Hello girls! I was busted taking their photo - although I think she was more intent on looking at cars coming up behind us. 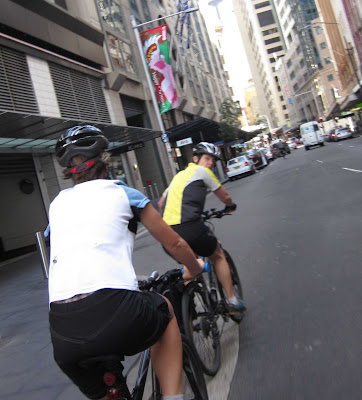 Notice the pink and red and green "Christmas" banner dangling from the lamp post? I've looked at a few around town, and not one actually seems to have anything to do with Jesus and his birthday. Bloody PC maniacs.
Badly proofread by Boy on a bike at Tuesday, November 23, 2010