I have been copping a bit of grief over the last few days from people who object to me calling the owner of this car a "weapons grade spunk monkey". 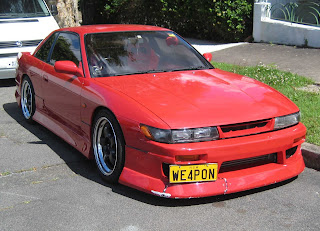 My issue is not with the car per se. I prefer an old fashioned V8. Rice burners like this are just not my thing. I also don't get the idea of drifting. I prefer to get sideways on gravel. Doing it on a race track is soft compared to doing it on a rough country track. But that is not my issue either.
What I took issue with is the fucking silly number plate. A car is not a weapon. A car is a means of conveying people from one place to another, whether slowly or quickly. My view is that only someone with an exceptionally small penis would acquire a plate like that. The car actually looks like fun. Almost as much fun as waking up in the back seat of one of these at 2:30 in the morning as we blasted through a red light at 180km/h. And then another. And another. And another. And so on. Such was my youth.

Anyway, I thought I would give Mr WE4PON and his pals a quick lesson in what real weapons look like. I have actually carried and fired all of them in real life, rather than in a computer game.
Let's start with the M60, which I carried for a few years. Almost the most funnest weapon I have fired. An instructor, who had stooged around the Vietnam jungle for a year and knew what being shot at felt like, once rated me the best machine gunner in our regiment. He might have been buttering me up, but I don't think he was that sort of bloke. I loved this thing. Less efficient at cutting down trees than a chainsaw, but much louder and completely enjoyable.

A bit of Plastic Fantastic - the M16. Not a bad piece of kit. I certainly favoured it over the SLR when I moved into driving trucks - much easier to get in and out of the cab with the M16. However, I prefer the thump of 7.62 when shooting something.

The F1 sub-machine gun. This was being phased out as I was being phased in. I can load it, fire it, strip it and clean it; but apart from that, I thought it was a chunk of crap. Fun on the range though. For Mr WE4PON and his mates, think of it as an old school MAC-10.

The FN L1A1 SLR. Lovely bit of stuff. I was a bloody crack shot with one of these, being chosen to represent my regiment in competition for a shooting trophy. Didn't win the trophy - I am good, but not that good. I still dream occasionally of stripping and re-assembling one of these. I reckon I could still do it blind folded.

The Browning 9mm Hi-Power. Didn't get to use one of these very often, but they're a fun hand gun.

The heavy barrelled L2A1 version of the SLR. Rarely seen in my day. Only got to use it once.

Enough of rifles and so forth. Now to mines, such as the claymore. I have lost count of the number of times I set these up and took them down. Fun to watch them go BOOM on the range. Enormous fucking shotgun. Pink mist personified.

Fragmentation grenade. Only got to throw these live once a year. They're much harder to throw accurately than you might think. However, I played a lot of cricket in my youth, and was the only person on an urban warfare range than managed to throw one through a window from a distance. I was very chuffed with that. Once you've pulled the pin, it's a good idea to throw it rather than drop it (which one idiot did on the range).

The M72 rocket launcher. Only fired a few. Good fun. No range shoot was complete without at least one failing to fire (dodgy firing circuit) and having to be blown up with explosives.

The Karl Gustav. Big heavy bastard, louder than an AC/DC concert, more back blast than Michael Moore lighting a fart. Able to suck all the snot out of your nose, and all the fillings out of your mouth. Great for blowing koalas out of trees. Not sure it is any good at taking out tanks.

The M79 grenade launcher. Excellent at pinching the skin of the unwary between thumb and fore finger. Recoils like an angry water buffalo. Lobbing a grenade into a bunker at 150 metres is a strangely satisfying experience.

And I was even trained in using one of these - the bayonet. If all of the above fail or run out of ammo, there's always the pig sticker.

There are probably a few that I have forgotten, but that's not a bad list. As Crocodile Dundee would say, "That's not a weapon, this is a list of weapons".
Badly proofread by Boy on a bike at Wednesday, January 27, 2010

Gotta agree with the M60, too much fun to have in one day!

Just being picky here , BOAB, but the picture you have labelled as an M-16 is in fact the current issue M-4.
Same basic platform, but the M-4 is way shorter and has different furniture to the old M-16A1.

Right you are Pedro, but it's actually quite hard to find an appropriate photo of this sort of stuff. And I couldn't be bothered searching for more than 10 seconds per photo.

Only one of these I didn't fire was the Karl Gustav. Only one I fired in anger was the SLR - all the rest at the range. Carried an M-72 for months in country, but never got to use it. I was on the receiving end of a burst of M-60 in a friendly fire incident. Not funny.
I also fired a captured AK-47 - basic but effective.
The SLR was solid and reliable. There were those who (unauthorised) turned them into full automatic by devious means - very useful weapon.

I saw those devious means being used once on an exercise. Bit of match stick did wonders when firing blanks.

Trouble is, dopey forgot to remove the bit of match stick before moving onto the live firing range. We were all lying down, getting ready to go through the zeroing process, and were given the order to fire when ready. Dopey squeezes the trigger, and let's off a three round burst. RSM roars up and charges him into next week. So much for that trick....

lol. I can't belive you actually did a full blog with pics of weapons. You have way too much time on your hands dude. haha.

The car's a weapon if he sees you taking a photo of it again and runs you over. lol jks.

Jamie, if you ever spent any time in the Infantry, you'd understand what "tough" is. Having a tough sounding number plate is bravado, and not much else.

I believe Call of Duty is based in WWII. Never played it myself. These are all Vietnam era weapons. First person shooters are fun, but the real things are even funner.