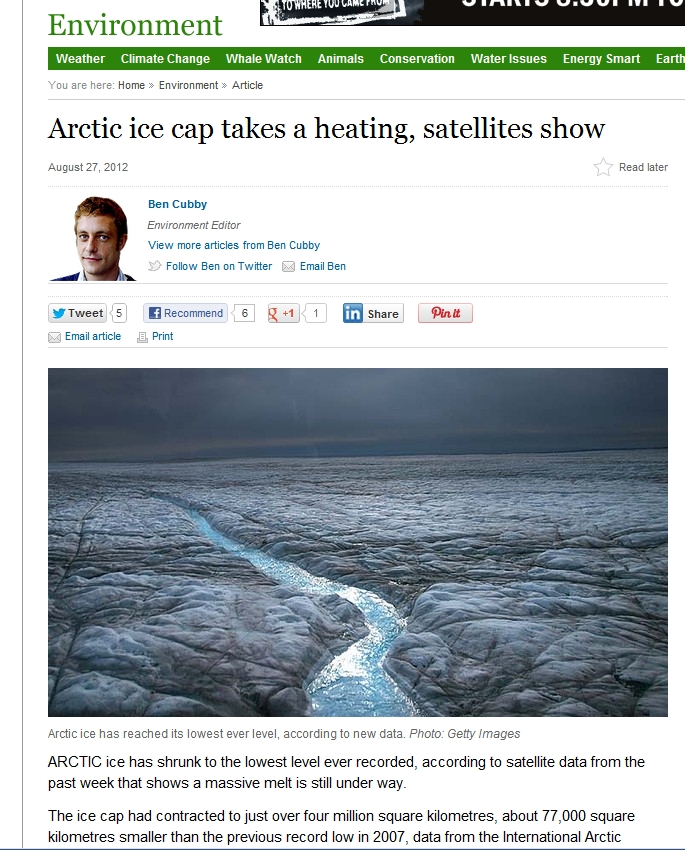 OK, as usual, this is me being picky. Our first image is from the SMH, and it shows a story that Ben Cubby ran about melting arctic sea ice. Someone forgot to tell Ben that back in 2011, some kraut dudes from the Max Planck institute wrote a paper saying that we'd never reach a "tipping point" as far as melting Arctic ice is concerned. Anyway, cast your eyes over the photo that the SMH ran to accompany this story about melting Arctic ice. 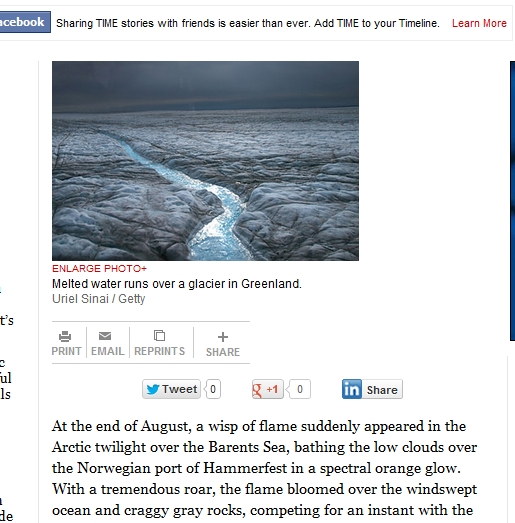 I did a tineye search on that picture and got quite a few hits. Interestingly, two of those hits were from Time and the Grauniad. Both described the photo as showing melting water in Greenland.

So why has the SMH chosen a picture that appears to be of Greenland to illustrate a story about the Arctic? Laziness? Sloppiness? I notice they only mentioned Getty Images, and left off Uriel Sinai in the credits. 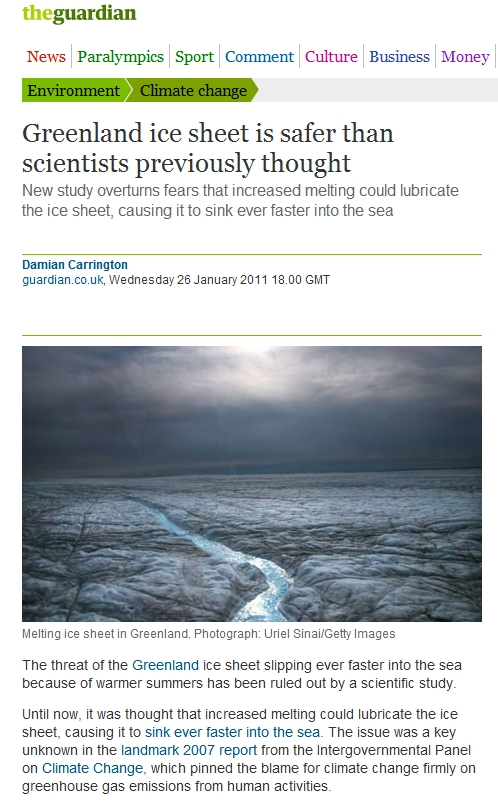 I visited the website for Uriel Sinai. He has an entire folder there of shots from Greenland. In fact, this was his home page when I dropped by. So I guess it is pretty clear that this is a photo of Greenland. And it is by Uriel Sinai, who is not credited.

It matters to me. If the story is about the Arctic, use a photo of the Arctic. Don't use a photo from another region entirely. Be accurate and truthful. 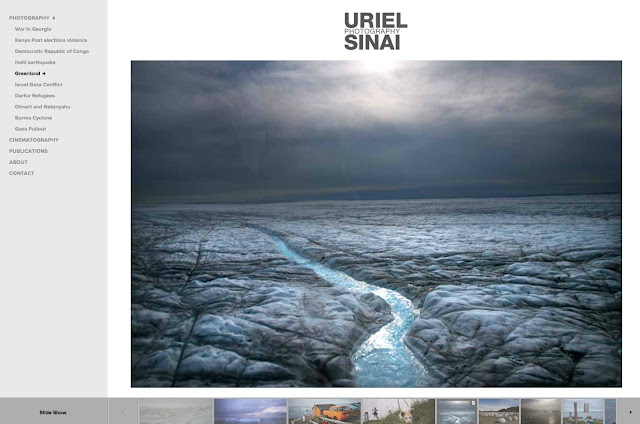 BoaB I'm not sure how to break this to you but over 80% of Greenland is within the arctic circle, it's not a completely separate geographical region whatsoever. So now that we've dealt with your geographical embarrassment why don't you comment on the actual point of the story that arctic sea ice has fallen to it's lowest extent ever?

But the Antarctic is above average...
http://www.natice.noaa.gov/products/products_on_demand.html
--> enter Antarctic (e.g. daily).

And in any case Arctic ice has only been mesured by satellite for 30 years so "lowest ever recorded", while I suppose is literally correct, is more appropriately "lowest recorded in the last 30 years for which data have been available". Not as exciting in a headline, sure.

1. The "Arctic" encompasses that potion of the Earth above the "Arctic Circle", Latitude 66deg 32' North.
2. The 'arctic ice' referred to is better noted as "Arctic Ocean ice cover". The amount of ice cover varies during the year, and its maximums/minimums vary cyclically over a period of years. Ice covering Greenland is not included in the term "Arctic ice".
3. The phase 'lowest extent ever' can only be used in reference to the years from 1979 to the present. A modicum of knowledge concerning the history of the Arctic would acknowledge that the 'lowest extent ever' has occurred a number of times prior to 1979.

It wasn't clearly labelled Greenland at all, it was labelled "Arctic sea ice has reached its lowest level ever, according to new data" so perhaps you could improve your reading comprehension before having a go at others. I see no problem with an article about Arctic ice using a photo of ice in the Arctic as they have here.
By lowest extent ever I meant the satellite data record has fallen its lowest ever recorded level, with a clear year on year trend of a shrinking ice area.

Rob, the original picture is labeled Greenland and has nothing to do with arctic sea ice. Its a glacier, do you get it now?

"...year on year trend of a shrinking ice area." By whose measurements? References please.