After the storm in a teacup that developed after my last post, I thought I'd stir the pot a bit more.

This press release was picked up by Ben Cubby, the indefatigable environmental editor at the SMH. His story, "Arctic ice cap takes a heating, satellites show" How do we know he picked up this press release? Well, his article states:

The ice cap had contracted to just over four million square kilometres, about 77,000 square kilometres smaller than the previous record low in 2007, data from the International Arctic Research Centre and the Japan Aerospace Exploration Agency indicates.

The only reason I knew about the IARC was because I Googled it after reading Ben's article - which was also published on 27 August 2012.

I would have thought that it was reasonably obvious that Ben's article was about sea ice. After all, he quotes Will Steffen as saying:

''Because as the ice melts it uncovers darker water beneath, which traps more heat - it creates feedback.

Get that? It uncovers water beneath the ice - not land.

One fascinating point about the press release from the AIRC is that it mentions the WWF. Astute readers may know that the WWF owns 1/3 of Earth Hour, and that Fairfax owns another 1/3. A massive multinational globalised advertising conglomerate owns the last 1/3. It's odd that Ben fails to mention anywhere that this scare mongering about melting sea ice is being pushed by the WWF - a company that his employer has secretly partnered with. Well, it used to be a secret.


The ice loss is also attracting the attention of industrial interests such as oil and gas development and shipping. WWF is concerned that new developments in the region should take into account the ability of already stressed Arctic systems to absorb more change.

This summer, researchers and WWF staff are taking part in the "Sailing to Siku" expedition to the Last Ice Area between northern Greenland and Canada where the last summer sea ice is projected to remain longest. Scientists on the expedition are assessing climate-related changes to this little-studied, but increasingly important region. This in one of several WWF projects to encourage resilience to climate change in the Arctic. WWF is also working of projects to reduce global carbon emissions.

When Ben used the press release, he largely managed to omit that it was about sea ice, and he made it about "Arctic ice" instead:

The Arctic sea ice extent has hit its lowest extent since satellite records began, according to data from the IARC-JAXA Information System and the U.S.-based National Snow and Ice Data Center. More melting this year is likely, as the lowest sea ice extent has typically been recorded near the end of September, a month away from now. The shrinking sea ice is one of the most visible early impacts of global climate change.
"Record-breaking ice minimums are becoming the new normal", says Clive Tesar of WWF's Global Arctic Programme. "We're breaking records on a regular basis as the sea ice continues its decline. ......This summer, researchers and WWF staff are taking part in the "Sailing to Siku" expedition to the Last Ice Area between northern Greenland and Canada where the last summer sea ice is projected to remain longest.

In fact, "sea ice" is mentioned 11 times in the original press release from the AIRC.

So I think I am on pretty safe ground when I state that this was all about sea ice - in the Arctic.

Yes, a lot of Greenland sits above the Arctic Circle. That is true. However, the ice sheet that covers that Greenland land mass is, funnily enough, not used when measuring Arctic sea ice. The picture below from the National Snow & Ice Data Centre makes it pretty clear what they are looking at when measuring sea ice, and the ice sheet covering Greenland ain't included in that white bit. Sure, there is sea ice along the eastern coast of Greenland that is measured; but they don't look for sea ice on land. 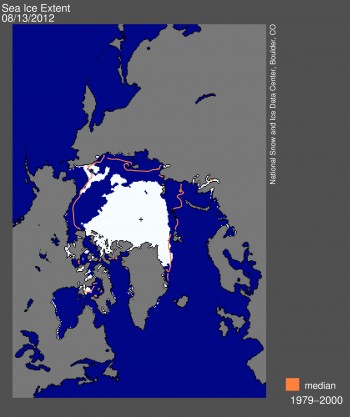 So, let's go back to Ben's article. It talks about Arctic ice and has a photo of Greenland - and presumably a photo of ice covering the land bit of Greenland, since it was used in articles elsewhere to illustrate the possibility of the Greenland ice sheet melting.

The source information from IARC and JAXA mention "sea ice" 31 times between them. Ben mentions it once, in the very last line of the article, and an inference to sea ice from Will Steffen:

The US National Snow and Ice Data Centre, which keeps separate satellite records of the extent of sea ice, is expected to publish further results over the next week to confirm record-breaking low.

Next time, I'll be more attentive to detail. I'll remember to say "Arctic sea ice" rather than just "Arctic ice".

Anyway, I think we can say that the photo that was used to illustrate this story is a great photo; but it has little or no bearing on what the story is about.

I am now going to write a story about the picking of organic bananas in Queensland, and illustrate it with this picture:

Coffs Harbour is of course in NSW, not Queensland. But who cares about the geographic exactitude - right? (And that's not a real banana by the way).

If you you had raised the point that the photo was of glacial ice when the article was about sea ice I would have agreed with you however your complaint was "If the story is about the Arctic, use a photo of the Arctic. Don't use a photo from another region entirely" it is simply fact that they did not use a photo of a different region, the photo is of Greenland and Greenland is in the Arctic. It would not surprise me in the slightest to see a picture of the Big Banana in a main stream media story about organic bananas. The media is an entertainment medium and the photos are as much about visual attraction and illustrating the story not necessarily scientific "exactitude". If you want scientific exactitude it is easy to go to the original sources as they are given. I think it is a stretch to say that Arctic glacial ice has "little or no bearing" on Arctic sea ice, they are closely related as far as a non technical publication is concerned and simply represents a little artistic license on the part of a journalist.

Never defend your position BOAB, all people remember is the original stuff.

So there you have it BoaB.
Rob is right. If you are searching for accurate information or raw unedited news, a newspaper is not the place to be looking.
Newspapers are where you go for entertainment.

"I think it is a stretch to say that Arctic glacial ice has "little or no bearing" on Arctic sea ice, they are closely related …"
I'll type this slowly for Rob's benefit … Sir John Franklin's ships, HMS Erebus and HMS Terror, were sunk by Arctic 'sea ice'; the RMS Titanic was sunk by Arctic 'glacial ice'.
Also, the RCMPV St Roch sailed from Halifax to Vancouver vie the "Northwest Passage" in 84 days, in 1944.

Ill reply slowly too, I said related not the same.

Pretty nice post. I just stumbled upon your blog and wanted to say that I’ve really enjoyed surfing around your blog posts. After all I will be subscribing to your feed and I hope you write again very soon!

You need to work on that absence of firing synapses you suffer from. And that inability to comprehend rather simple statements.
Did you graduate from a 'studies' program?