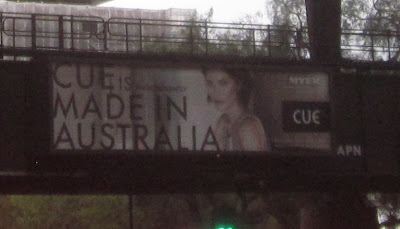 This billboard is on the side of the railway overbridge leading into Circular Quay station. Sorry about the really poor quality - the lights had just turned green and I was riding away one handed.

I really don't care if their garments are stitched together by 12 year old slave kids in Bangladesh - it's the deliberately misleading aspect of it that I can't stand. Why Myer agreed to it is beyond my understanding.
Badly proofread by Boy on a bike at Saturday, September 29, 2012