I was in town on Saturday (listening to the riotous march go by, wondering what the hell it was) when I felt a bit peckish and started looking for lunch.

The places that I normally go when I'm at work were closed, so I wandered the streets around the QVB looking for something interesting.

I settled on a place called Ipoh - mainly because it was the only joint open. I was tossing up between a laksa and gado gado, and settled on the latter. I like a good gado gado - lots of crunchy vegetables, a bit of boiled egg and all topped off with a good peanut sauce. I sat at my table, reading an old copy of The Spectator, expecting something like this to turn up: 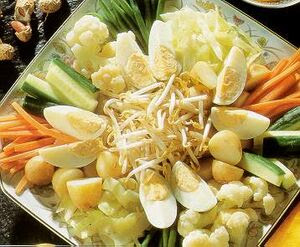 Instead, what I got could best be described as "peanut sauce soup". I like a smattering of thick, chunky sauce - I got a bowl full of running soup. I like crispy vegetables that you can smear a bit of sauce over - I got soggy vegetables steaming in soup. I couldn't identify the carrots from the tofu - it was all just brown bits of stuff.

I won't be trying that again.

As for the march and riot - I missed the whole thing. I had popped into the office, and heard it go by. I'm quite used to hearing noisy marches on the weekends when I'm in the office - most of them go unreported. The traffic on George St gets held up for 10-15 minutes as the weekly mob walks by, chanting and waving their banners, and that's it. Yesterday's mob sounded no different than usual - I thought they might have been state school teachers protesting about budget cuts - just goes to show you can't tell what's going on from the noise. From 20 floors up, all you hear is a lot of noise, and you've got no idea what they're chanting.

What was interesting was the mood on the street when I walked out. The CBD was full (as usual) of people shopping and seeing the sights and so on. When I was waiting for the lights to change at each intersection, I had a listen to what people were talking about. Perhaps half had seen the protest go by, and the rest had been totally absorbed in shopping and had missed it completely .

Those that had witnessed it weren't happy - the women in particular seemed quite scared. The normal happy mood had soured quite badly.

And remember - all they had seen was a few hundred noisy, aggressive protesters with moronic signs go by - the rioting in Hyde Park was yet to come.
Badly proofread by Boy on a bike at Sunday, September 16, 2012