How a newbie bike commuter can navigate using The Force

GPS units are a dime a dozen these days - there are plenty of options if you want to mount a smart phone with GPS on your handlebars, or a bike specific GPS. When I started commuting though, none of these options existed. If you were going somewhere unfamiliar, you photocopied maps from a mapbook, sticky-taped them together and then marked the route with a highlighter. Or you got really tricky and wrote out a route map with all the turns and distances between them.

I did that once or twice, and then decided to use The Force. 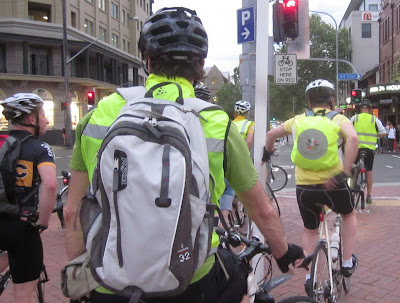 My reasoning was that almost every other cyclist on the road knew where they were going, and as there are a fairly limited number of options for where people are riding to at 0630, chances are that if I simply tailed one, I'd end up getting to where I wanted to go.

And it worked almost every single time. If I developed a gut feeling that a cyclist was starting to lead me astray, I'd stop and wait for another one to come past and then follow them. On busy routes, like the Canada Bay area into the city, there are hundreds of cyclists trundling along each morning. Waiting more than a minute for another cyclist to come along is pretty rare - unless the rain is absolutely bucketing down. 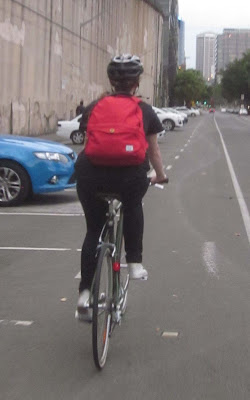 Commuters are generally pretty easy to spot. For starters, most of them tend to be wearing a back pack or they've got panniers attached to their bike. Some of them tend to be riding fairly casual, upright bikes. Those on fancy road bikes are usually covered in fluorescent material. Once you know what to look for, you just tag on behind them and away you go. 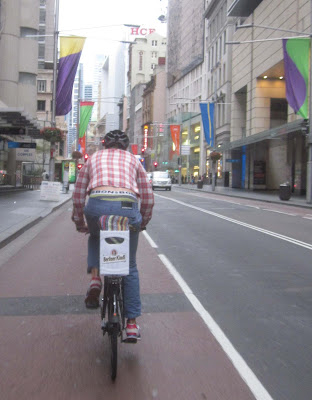 This bloke was a bit different - he's entirely avoided the lycra look, and he's certainly not riding a flash road bike. However, Mr You Can See My Undies went flying past me when the lights went green, and I had a bit of trouble catching up to him to take this photo (I blame it on Friday Legs). If the weather is balmy and the ride is short and flat, there's no need to spend a motza on all the go-faster gear. 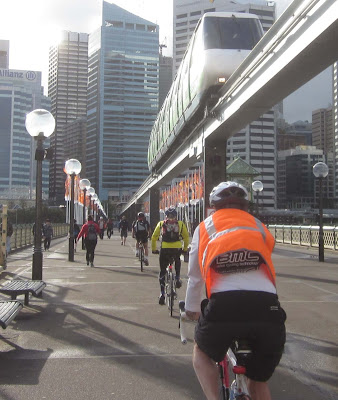 It's going to be interesting when they start demolishing the monorail. It broke down last week - two trains were stranded due to a power outage, and they had to bring in cherry pickers to get the passengers out. Thankfully, I've never had to be rescued when my bike has broken down.
Badly proofread by Boy on a bike at Saturday, September 29, 2012