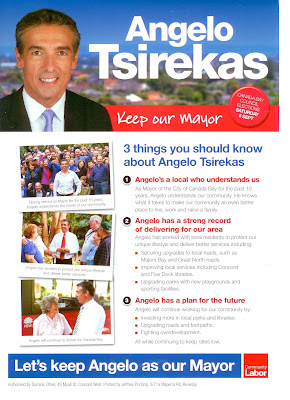 Disclosure - I'm not terribly keen on Angelo. My dislike for him started when he tried to sleaze onto the missus at a council event. If I'd been at the event rather than minding the kids, his nose might be a bit bent to one side in the above photo. But now that is over and done with, let's look at the guff.

This pamphlet is a lot larger and wordier than the Liberal party version. However, it boils down to the same sort of solid, boring, local government stuff. Libraries, parks, playgrounds, footpaths, roads and rates. The only thing that doesn't get a mention is rubbish. Good.

The top group photo shows Angelo in front of a crowd of locals. The bloke on the far left is a Labor counciller and the bloke on the far right is also a Labor councillor - and he was investigated by ICAC in 2010 over some property that his wife owned, but was renovated using Burwood Council staff and resources. I presume everyone else in that photo represents every last Labor party member in the area.

I have to chuckle at the last promise, which is about "fighting overdevelopment". Angelo has been Mayor during the development of the Rhodes peninsular, which is a massively built up residential area. I see nothing wrong with that - it's a good shopping precinct now, a former industrial wasteland now has homes on it for about 10,000 people and it's right on the train line. What the hell is wrong with development? And how do you define "overdevelopment"? Is it like pornography - "I know it when I see it?"
Badly proofread by Boy on a bike at Monday, August 20, 2012

Myall St, that's only three streets from where I grew up, Colane St. I remember Rhodes well when I was a kid. The train works, the smell of Union Carbide on a hot summer's afternoon. I had a mate in Cavell St, just near the school. Just across Homebush Bay I used to go fishing for eels with an Italian mate who's father would smoke them and sell them to his wog mates and give us some money for our efforts. No Olympic park back then, just the meatworks and the brickworks and Pippita railway station. He used to own the green grocery on the corner of Concord Rd and Boronia St. It's not there anymore. I went to primary school at St Ambrose. I left Sydney about 30 years ago, I'm 50 now. I have a lot of fond memories from back then. Life was so much simpler.