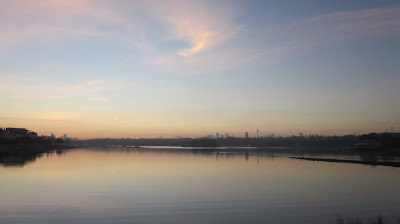 It's one of those nights. I smashed myself riding home tonight, racing a bloke that was a good 10 years and 20 kilos lighter than me. He made it look easy - I got home OK, but it's hit me hard now. I'm rooted. Utterly rooted. 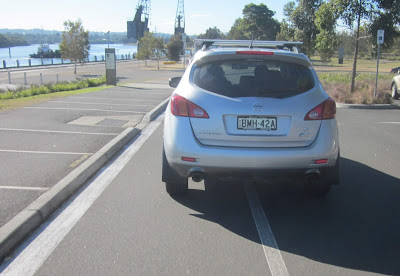 Just for something different, I rode west on the weekend. I ride for about 90 minutes a day, but my commute is very stop-start. I go through brake pads like crazy. I clip in and out dozens of times. That makes me fairly good at a very specific style of riding. I'm hopeless on longer rides with not breaks, so it's good to head west rather than east. I rode for over 90 minutes and only stopped 3 times (for lights) during that time. All those stops were during short periods at the end of the ride, so I did about 80 minutes non-stop. The poor old legs aren't used to doing that, but they need it.


The only downer during the ride was the knob shown above, who slowly drifted further and further into the bike lane until he almost hit the kerb. Some drivers are just hopeless. 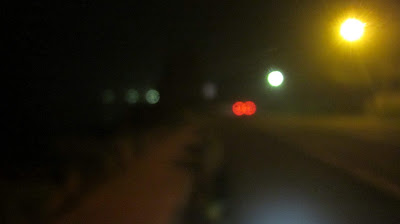 The rain has settled in this evening, and it was preceded by heavy fog this morning. At best, visibility on the hill tops was about 100 metres. I tried to take a photo in the pre-dawn dark to show how creepy it was. This is the best the camera could do. 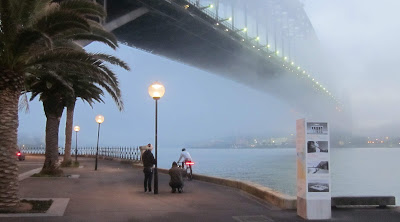 It was lifting a bit by the time I got into town. Just as I went under the Harbour Bridge, I spotted this photo shoot in progress. Given the huge red light on the back of the bike being photographed, I presume it's going to be used in an advertisement for the rear light.

You sure get around:

That link went to a dead page for me GeorgeL

Don't know what happened with the previouslink, try this:

There's a section on my regular commute where it's supposedly one car lane and a bike lane, but since a lot of people turn left at the intersection, it effectively becomes 2 car lanes, no bike lane, not even shoulder. I combat this by riding between the two lanes of cars and shouting "you're in the bike lane" to the offending vehicles. I don't know that it's effective. But it makes me feel better.

Hey BOAB, why is there some white bits on your words?

I have the same problem sometimes - lemme know how to fix it eh?

Now I get the joke!