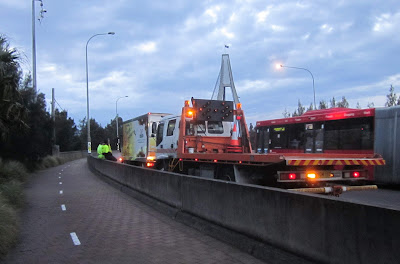 Another day, another broken down vehicle on the Anzac Bridge. In the top left hand corner, there's an RTA traffic camera. I bet everyone in the control room was looking at this scene and yelling at the bozo on the monitor who was causing traffic chaos for thousands of motorists. I once saw a bloke run out of fuel in the middle lane just before the peak of the bridge - he didn't have enough juice to get over the hump, which would have allowed him to roll down the other side and off an exit ramp. The idiot then jumped out of his ute and ran across three lanes of traffic to borrow a mobile phone from a security guard....all so he could ring his boss (the owner of the ute) and swear at him for forgetting to refuel it the night before.

Out there in the darkness is the Harbour Bridge. It's sitting under that big cloud, which to me, looked like one of the spaceships from Independence Day.

Speaking of weird things in the dark, I was annoyed this morning that a car crash failed to happen. I was cruising down a hill at about 40 when White Van Man flew past me. It was on a narrow road - narrow enough that when buses are travelling along it, cars coming the other way have to pull over to let the buses past. White Van Man was in a hurry, and a roundabout was coming up. It's so easy to tell when they're in a hurry - he was snatching his way through the gears as he accelerated.

I hate White Van Man. They are the natural enemy of every other road user.

Coming from the right (with right of way) was a tradie in a ute. I hate tradies in utes almost as much as White Van Man. Both drive way too fast in the morning, and they tend to treat cyclists as road kill. I've had so many close calls with both types that if you armed me with something small and  handy, like a 9mm Hi-Power, I'd open fire reflexively as soon as I spotted either of them on the road.

I was waiting for the brake lights to go red on the van, but nothing happened. White Van Man kept on heading towards the roundabout at around 70 (in a 50 zone). Tradie in ute could see the van coming, but he also showed no signs of slowing, figuring that as he had right of way, White Van Man would stop.

Ha - sucker. That's  happened to me plenty of times. I'm in a roundabout, when White Van Man or Ute Man decides that the road rules don't apply when giving way to cyclists with right of way, and I have to brake hard and swerve to avoid a smash.

In the end, the Ute woke up the fact that White Van Man was in no mood to stop, so the Ute came to a screeching halt, skidding through the roundabout and just missing the back of the Van.

I just shrugged and went on my way, sorry that I had missed what would have been a very entertaining punch up. 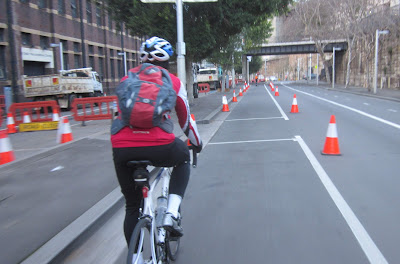 The roads around The Rocks are being ripped up at the moment to lay more electrical cables. The result is traffic being diverted down the wrong side of the road by Irish lollypop ladies. Why are all the lollypop ladies Irish? Is this fall out from the economic crash in Ireland?

The people who laid out the cones weren't very generous when it came to marking the lanes. A fat arsed car, like a Ford, would be rubbing those cones along each side. That hasn't stopped the odd idiot from trying to overtake me in the morning when I'm riding through.

The cyclist above and me had a classic Irish moment this morning. We got to the last lollypop lady (having ridden down the wrong side of the road for some distance) and she waved us through. What she forgot to do was to direct us back onto the correct side of the road, so we kept on riding up the wrong side. We were too far gone when she shouted after us that we were going the wrong way. It took me a few seconds to decipher the accent, and by then, there was no turning back. The other bloke looked at me; we shrugged our shoulders at each other and pushed on, hoping no speeding buses were coming the other way. 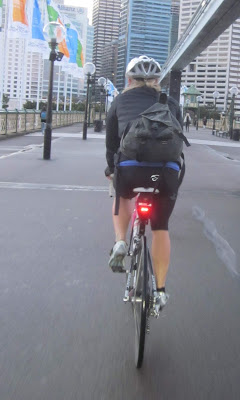 Ah Cav.....you would have died if you'd been on the bridge with me this morning. As it was, I was just about dying of exhaustion. I spent a few moment admiring the shapely down tubes and curving forks of the lady above, and then she put the hammer down and left me for dead. I'm not used to that. Most female commuters are of the relaxed and non-sweaty variety, preferring upright bikes and lower speeds. The weekends are different - then the roadies and triatheletes come out, and the chicks are seriously fast. But not on weekday mornings. Getting blown into the weeds was a bit disconcerting. 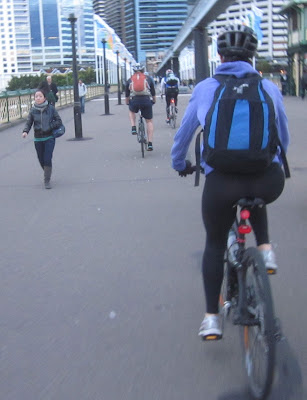 Then again, if you put the two ladies in this photo on one end of a see-saw and me on the other, we'd about balance out. 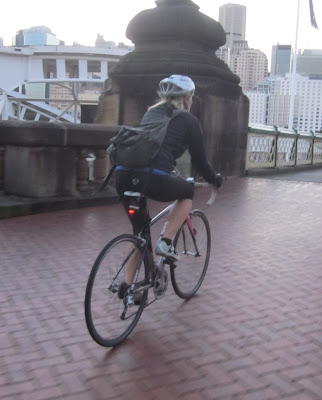