I had to re-learn an important cold weather lesson this week - when expunging the contents of your nostrils, be sure to aim your nose away from your handlebars. Enough said. 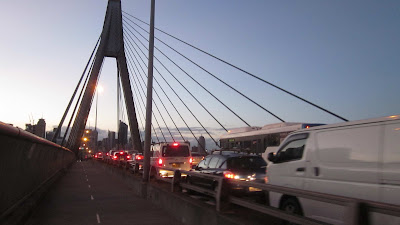 School holidays have started, so traffic should be light and fast moving. Not this week - there seems to have been a prang or a breakdown on the Anzac Bridge every morning, brining traffic to a stand still. When I'm travelling up hill at a much faster clip than the cars next to me, I know that something has gone badly wrong. 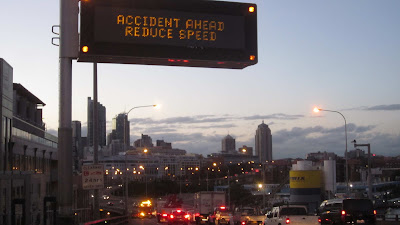 Sure enough, there'd been a bingle at the first exit. It's not surprising - some drivers don't realise until the last minute that the left hand lane exits the bridge, so you occasionally see a car swerving frantically to the right just as the driver realises they're about to get off the bridge too soon. And then you get the inconsiderate morons who don't want to queue up for the exit - they duck in at the last minute, ramming their car into any gap that exists. I don't know what happened this time, but I've seen tow trucks at this spot a few times this year. A pelican enjoying the sunset. With a couple of little pelicans (I think). I didn't stop to look that closely. 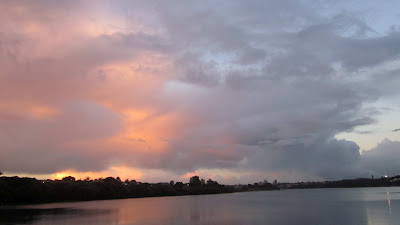 I usually hit the road in the mornings around the same time as the airport curfew lifts. We're not directly under the flight path, but we're close enough to be able to read the tailfins as the planes line up to land. We've had patchy cloud some days this week, and I spent a few minutes one morning watching the lights of the aircraft as they emerged from the clouds. It was still pitch black on the ground, but the sun was up just enough to shed some light on the clouds. It was a pretty amazing sight. I guess you had to be there, shivering on the wet grass, to really get it.
Badly proofread by Boy on a bike at Saturday, July 07, 2012