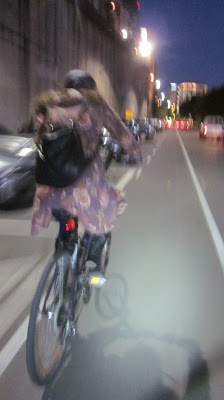 I just about killed myself tonight - I decided to race a car. Silly bloody thing to do - those things have engines and suchlike, whilst I have to put up with a set of aged legs. Unlike wine, I don't think legs necessarily get better as they age. I managed to stay ahead of the car over my selected distance - a winding bit of road where my cornering ability would outweigh the car's engine advantage. Trouble is, I completely shattered myself in the process. Am preparing to go face down on the keyboard at any second..... 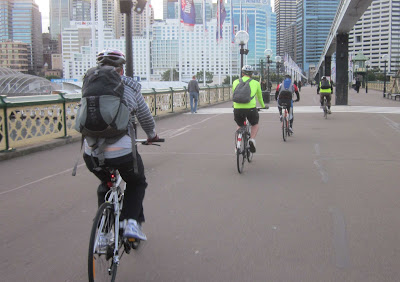 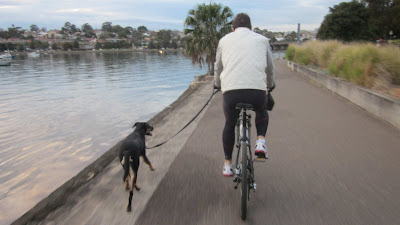 I wish people would put lights on their dogs. As usual, the magic of the camera has made this photo look a lot brighter than it actually was. I almost ran over a black labrapoodle puppy this week - the owner stopped at the kerb to let me pass, but they hadn't trained the puppy too well. It shot out from behind them and almost went under my wheel. I had the anchors on so hard that my back wheel was off the ground. Good thing I was on a bike and not in a car - otherwise, it would have been a flatrapoodle. 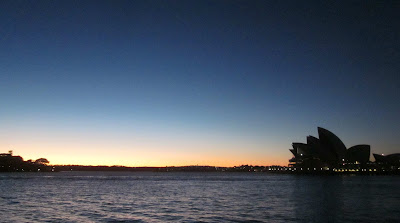 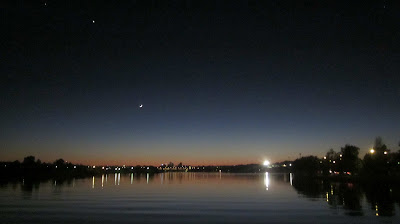 Star light, star bright - how many fucking ninjas are there out tonight?

As much as I enjoy watching the Tour, I like to read at the same time. I read One Way Road last week, by Robbie McEwen. It was great - it's the kind of interesting, well written book that should appeal to non-cyclists as well. I read about 1/4 of it online at Amazon before buying it and reading the rest the following night. I used to think that I was pretty useless for feeling so tired and smashed some nights when I got home, being barely able to roll off the couch for dinner. Then I read how the professionals feel after a hard day on the road (utterly smashed), and that made me feel much better. It made me realise that I almost never ride in my green zone (my comfort zone) - I'm always pushing myself into the orange, and occasionally deep into the red (like tonight). I enjoy it, and I can't stop it.

That got me in the mood for reading Mark Cavendish's Boy Racer. Again, I read a good chunk of it online before laying down the plastic. I read a tip about training that he received as a teenager - "Always train 16 hours per week - doesn't matter what you do, just do 16 hours".

I thought that was interesting, and then calculated how hard it would be for me to put in 16 hours on the bike a week. Depending on how many days I work per week, I'll ride between 7.5 and 10.5 hours per week - and that's not training - it's commuting. It might sound easy to add another 5 to 8 hours per week to my regime, but it isn't. There are kids to feed, meetings to attend, clothes to wash etc etc. 16 hours per week, when you work full time and have a family, is a bloody hard goal to reach!
Badly proofread by Boy on a bike at Thursday, July 19, 2012

The black and tan markings on the alleged labradoodle make it look more like a labradobe to me.