The CFMEU, and other crap you find in bike lanes 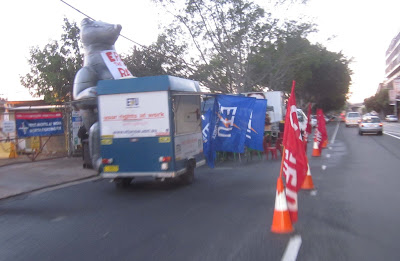 The CFMEU have been barricading the gates to the Barangaroo development each morning for the past week. I've got no idea what their problem is. However, I have a problem with them - they've decided to take over the bike lane for their protest zone, marking it out with flags and filling it with fat unionists.

The first time I rode through here, it was almost pitch dark, and I nearly slammed straight into the flags and a few dopey union thugs in dark clothing. Given how they love to strike whenever safety is a problem on a work site, you'd think they might know a thing or two about assessing site hazards, reducing risks and traffic management. Then again, maybe not. These morons don't seem to understand that the bike lane is there to separate bikes from traffic - to reduce the chance of a cyclist getting hit by a car. Forcing cyclists into the car lane is a recipe for disaster.

I tried sticking to the bike lane one morning, which was a bit of a mistake. One of the fatsos stepped backwards without looking and I had to brake, skid and slide out onto the road between the flags. Not a bad effort, given I was toodling along at 40km/h. Just glad it was so early, there was no traffic. 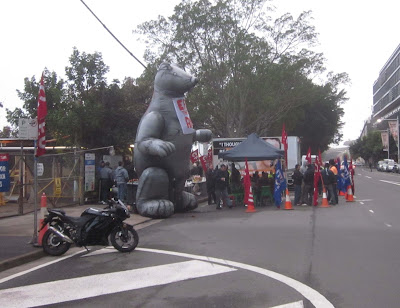 Whinging union members are not the only thing to be found in the bike lanes down that way - some taxi drivers have a bad habit of either parking in the lanes whilst awaiting a fare, or driving along the lanes in an attempt to pass other cars on the wrong side of the road.

If one of these taxi drivers crashes into the protest, it really will be Peak Stupid. 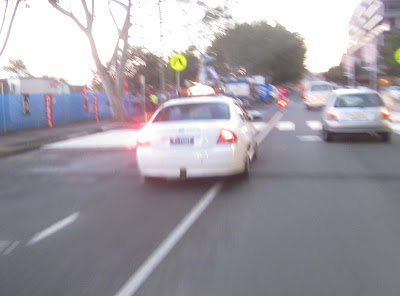 I must quibble: peak stupid implies that in the future stupid will fall. I am not so optimistic.

Double Darwin points if it comes off though....

Is that supposed to be a teddy bear with a possum's head?
The inflatable union rats here are much better done.