My old shoes died completely this week. Sure, they've been getting pretty manky for a while, but they really turned their toes up this week. I went to clip into a pedal in a hurry, and the cleat slipped off the pedal. I was putting enough down force on the pedal at the time to almost crush my nuts against the saddle as my foot slipped off, and the side of the shoe gave up the ghost and split from the upper down one side from heel to toe as the shoe twisted off the pedal. I had to ride home with one shoe half hanging off. And a sore nut. 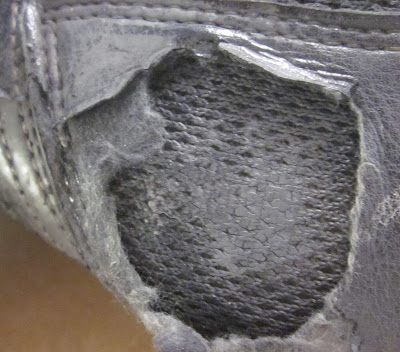 As you can see, they were pretty worn by that point. The constant scuffing of the shoes against various bits of the bike had worn right through the outer layer in a number of places. If they'd lasted any longer, they would have become extremely well ventilated. 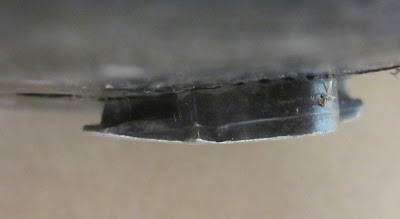 The wear on the cleats was something else. See how on the left, the bottom bit is worn to a point like a chisel? That's supposed to be rectangle shaped. The nose of the cleat has been worn down by constant clipping in and out until there's almost nothing left.

That's what a few years of commuting will do to your shoes. Commuting (for me) involves a lot of stopping and starting. There's at least 15 sets of lights between home and work, and chances are, most of them will be red when I reach them. By contrast, I can go for a weekend ride for a longer distance and period of time, and unclip only 2 or 3 times. The bloke who served me in the bike shop was stunned at the amount of wear on both the cleats and shoes. I guess I'm a bit of a tight fisted bugger when it comes to spending money on certain things.
Badly proofread by Boy on a bike at Tuesday, July 24, 2012

Cleats in good condition are a basic safety item and replacing them pro-actively is sound practice. So your nuts are worth less than $20?