Knobhead in a ute 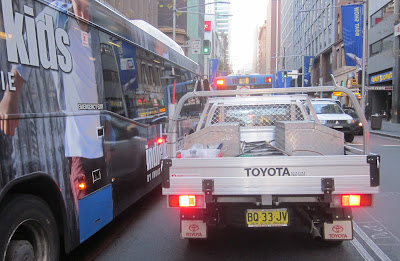 It's nice to know that some drivers aren't just pricks to cyclists - they are pricks to everyone else on the road.

Take this bloke in the ute. There was an obstruction in the bus lane, so the buses were pulling out to get around it. The bus driver indicated he was changing lanes, but the bloke in the ute just bulled ahead and blocked the bus, rather than letting it in. Everytime the bus driver pulled out a bit, the driver of the ute pulled ahead to block the bus out.

The ute driver didn't just do this once - he did it again at the next set of lights.

The big surprise to me was that this idiot was driving a Toyota ute instead of a Ford.
Badly proofread by Boy on a bike at Monday, July 23, 2012