How do you price a water cannon?

How much did the NSW Police water cannon cost?

If you ask Josephine Tovey at the SMH, you'll get the first answer. If you just happened to ask the then Police Minister back in September 2010, you'd get the second answer.

So how did Ms Tovey manage to inflate the purchase cost by 48%?

Simple - it appears she relied on that trusted source of information called.... the Sydney Morning Herald. Back in August 2007, the SMH ran a story on the unveiling of the truck. That story is now quoted by Wikipedia (so it must be true). In a rather stunning bit of cut'n'paste journalism, Ms Tovey recycled a story by Andrew Clennell and blended in some old news from the cop-hating Greens MP, David Shoebridge.

Notice anything similar about these two photos?


I lifted the following bits from the 2007 story:

The black truck with a fire hose on top made heavy work of it but eventually managed to knock over 120-kilogram pylons for the television cameras.

Yesterday, 18 months after Morris Iemma announced that the State Government would buy a $700,000 water cannon for the riot squad in what was widely depicted as a stunt in the wake of the Cronulla riots, the Premier unveiled it yesterday with a demonstration at Homebush Bay

The head of the public order and riot squad, Superintendent Steve Cullen, confirmed that the truck held 12,000 litres of water but would not say how long it could keep firing water, except to say it was more than five minutes.

That explains the following lines from Josephine's 2011 story:

THE state's $700,000 water cannon is rapidly depreciating in value and has still never been used, new figures show.

The four-year-old device, a large black truck that can carry 12,000 litres of water which it fires from its roof, is depreciating at 10 per cent a year, according to figures provided by the Police Minister, Mike Gallacher, in response to budget estimates questions on notice from the Greens.

David Shoebridge, a Greens MP who appears to loathe the police, guns and tasers (not necessarily in that order) asked a few questions of the Police Minister at a budget estimates committee on 17 September 2010. She at least got the bit about a Green asking the questions correct. He didn't ask any questions on this topic at the latest budget estimates meetings on 27 October 2011. These are not "new figures". They are old figures. And they are wrong.

What she failed to comprehend is that the answers were provided by the then Labor Minister for Police, Michael Daley. At that time, Mike Gallacher was the Opposition police spokesman, and didn't take over as Police Minister until after the state election in March 2011.

Hilariously, Jo offers the following description of herself: "I write about state politics for the SMH". FMD.

Now, to be fair to Jo, the 2007 story was based on a press release from the then Premier, Morris Iemma. Unfortunately, that press release appears to have disappeared down the memory hole. I have just spent a fruitless hour searching for the original so we could see what old Morris had to say back then. The closest thing I can find is this set of Legislative Council Questions and Answers from 4 April 2006: 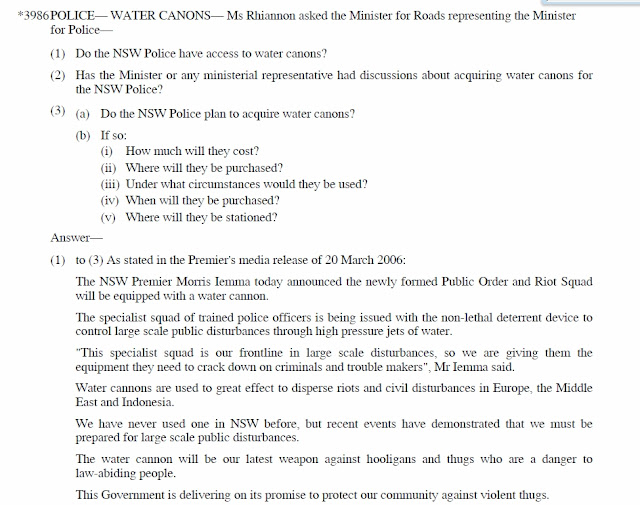 Unfortunately, no costs were mentioned in the answer. But of course the question was posed by another cop-hating Green, Lee Rhiannon.

This is not what I would call an accurate, well researched bit of journalism. But then again, Jo does "write" for the SMH.

Word of advice, Jo - don't believe everything the Greens tell you. And as for you and Antony Lowenstein Twitting at each other.....
Badly proofread by Boy on a bike at Thursday, December 08, 2011

So - by all means keep up the anger - but perhaps next time try and channel down a path that remotely approaches fact.

BOAB - I am not sure why you bother with this one. Looking for financial sense (or any other form of rational thought) from the Greens Party representatives will be a long and fruitless task. Even if it was $700k it was clearly money well spent. Like ambulances, there is no point waiting to buy a water cannon until you need it.

I haven't seen a trace of real journalism in a News Ltd paper for a very, very long time. I heard they sacked all the journalists there years ago, now they just have these "writers".