I'd like to say "Hi" to David Shoebridge, or the staffer in his office, who keeps tabs on his Google News feed. God, that must be a boring task. Imagine having to trawl through the backwaters of the blogsphere, forced to read blog posts like mine, and then pen a response. Glad to see the time of our elected representatives and their minions is being put to such good use. And this from a bloke who is mortally offended at the running costs of a Police boat and the maintenance costs on the Police water cannon.


Below are the two of the questions from David Shoebridge at the Oct 2011 Budget Estimates committee, and the answers from Michael Gallacher. This Q&A session revealed the maintenance cost of the cannon, the depreciation rate and the operating cost per hour. However, it did not cover the purchase cost of the water cannon, which was revealed at the 2010 committee hearing - that cost being $472,000, and not the $700,000 that David would prefer you to believe. Given that the cost of $472,000 was revealed in 2010, why did David do nothing to correct the erroneous SMH article which quoted an estimated cost from 2006 of $700,000?

I guess because if you want to make a figure look big and scary and bad, you use the bigger number (even if it's out of date). Especially when you're bagging an evil monster truck designed to scatter stinking swampies. 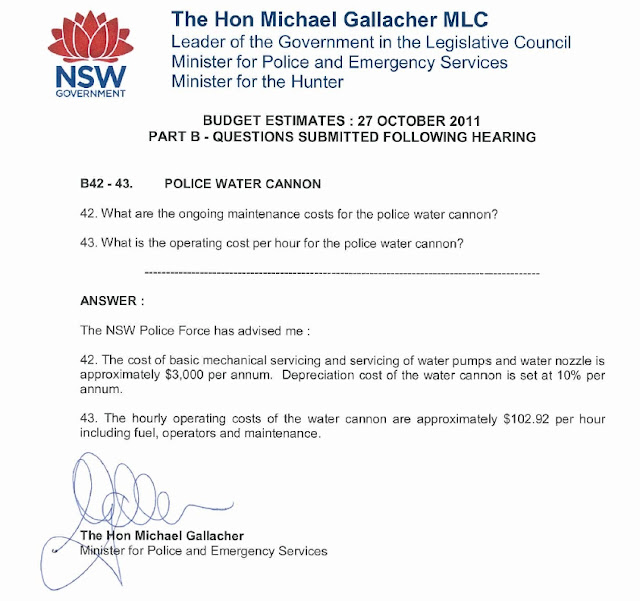 My biggest gripe about the 10% depreciation rate is the way it was spun as "rapidly depreciating in value". Did that spin come from Jo Tovey at the SMH, or from David Shoebridge?  Let's look at that 10% rate, and decide whether it is a "rapid rate" of depreciation.

Here's an extract from Greenpeace's financial statements for 2010.

In other words, Greenpeace's vehicle fleet depreciated at a rate of between 12% and 15% over those two years. Given that context, do you still think that 10% depreciation for the Police water cannon is "rapid"?

Greenpeace also offer this lovely note to their financial statements, informing us that the depreciate motor vehicles over 4 years. 4 years! No one tell David - he'll flip his wig if he finds that out.

And in case you are wondering what rate trucks should be depreciated at, the ATO offers some handy tips for commercial vehicles:


For trailers and trucks acquired before 1 January 2005 but on or after 21 September 1999, the Commissioner’s effective life  determinations were five years for heavy haulage trucks, 62/3 years for trucks generally, and 10 years for trailers


Wow, imagine that. According to the ATO, the effective life for trucks is 7.5 years. I'll leave you to do the maths on that one, and to work out for yourself whether 10% is a "rapid" rate of depreciation.

It must be embarrassing to now know that every accountant in the country that read this story died laughing at the idea of 10% being a rapid depreciation rate for a truck. Even the Greenpeace accountants must have had a wry chuckle over their soy tea. The Fairfax accountants probably died of embarrassment, shaking their heads at how little their reporters understand finance and accounting. Are you going to blame your pet reporter for that clanger, or claim it as your own?

I have another gripe with the SMH story, and that's how some words were switched around to change the emphasis on the costings. This is how the SMH put it:

The government spends $3000 a year on servicing its water nozzles and pumps and on mechanical maintenance.

This is the actual response from the Minister for Police:

"The cost of basic mechanical servicing and servicing of water pumps and water nozzle is approximately $3,000 per annum".

Note how the words have been switched around to put the water nozzles and pumps first, and mechanical maintenance last? When you read the story, that puts the emphasis on the water cannon (evil) and not the truck. Because what is "mechanical servicing"? Well, it's the same sort of thing as when you take your car to your mechanic for a 10,000km service. Oil gets changed, brake pads swapped, filters cleaned or replaced and so on. Shoebridge and/or Tovey have fiddled with the words to make us think that the evil water cannon is a horrible drain on the taxpayer, when for all we know it cost a hundred bucks to service the water nozzle and $2,900 to do a 50,000km service on the truck. It's all about how you spin it.

David Shoebridge then left a 2nd part to his comment:

Well, read the questions below and see whether you think Shoebridge is really supportive of the Police or not. After reading reams of hansard blurb and committee transcripts, he seems to have a thing about "Police brutality" and "Police shootings" and gets worked up into a lather about whether Police are wearing ID badges properly at riots and protests. Personally, I find question 71 below to be offensive and transparently wrong. "What investigations are current or planned to assess reports of police violence in this removal?" David, I suggest you go read up on Janus. 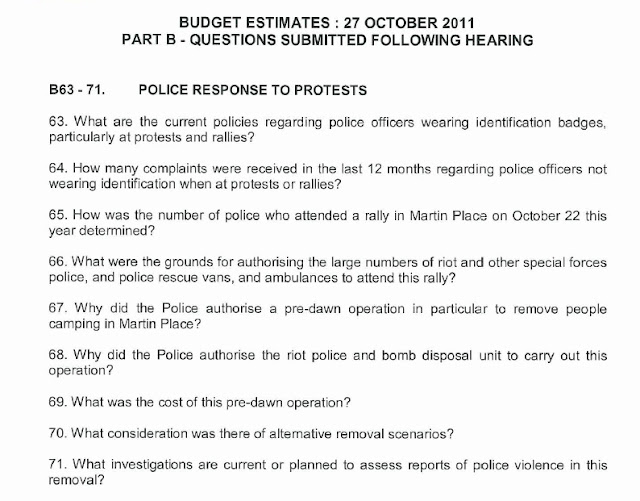 Answer to #68: Because the Armoured Assault Troop was not permitted to use live ammunition.

Answer to #70: Unfortunately, someone lost the recipe for the cupcake lures … and the officer assigned to lead the sing-along developed laryngitis.