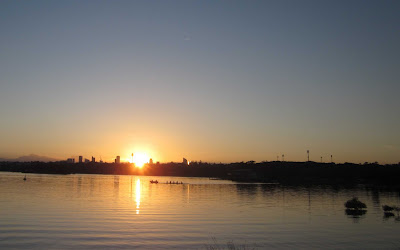 Today was Ride to Work day, which means Big Flipping Deal to me, since I ride almost every day. What is has meant in previous years is battling through hordes of slow moving cyclists - kind of like if we had a Every Learner Driver Drives to the Shops Day. Imagine thousands of Barinas with dented doors and Magnas with L plates tottering along at 30km/h, petrified learner drivers at the wheel.

So I got up early, avoided the crowds and managed to take a photo just as the sun was clearing the horizon - and I managed to get a rowing crew almost backlit by the rising sun. How about that? 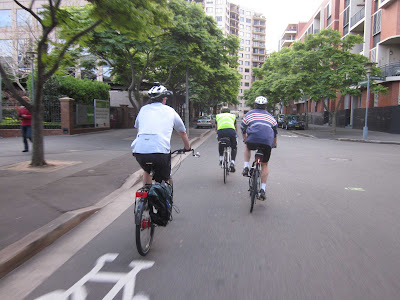 Cyclists really are divided neatly into two camps - those that disparage lycra, and those that swear by it (ie, those that have gone to the Dark Side). There were plenty of the former out and about today - slow moving people in casual clothes or sports clothes generally don't fit the mould of the Sydney bike commuter. I started out as one of them - and then after a bit of chafing and a lot of sweating, I made the switch. And I've never looked back. Cyclists who eschew lycra are, in my opinion, cyclists who have never ridden far enough and/or fast enough to get crotch rot on a hot day. 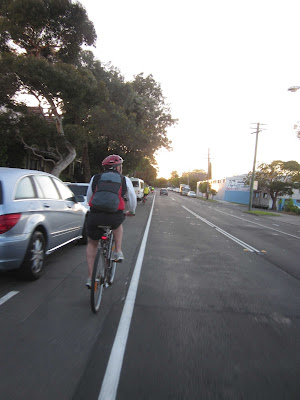 And then the day was over, and it was time to go home.
Badly proofread by Boy on a bike at Wednesday, October 12, 2011