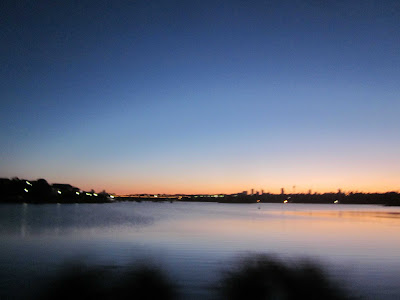 If I can, I like to have a crack at the Spring Cycle. It's a cycling promotion event - not a race - and as the name suggests, it's held in spring. Start time is 0630 in North Sydney, which is about 15km from home. I was up at 0500 and on the road early enough to make the start time. The last time I did it, I arrived a bit after 0700 and I was stuck in meandering hordes of inexperienced, unfit cyclists for the next 3 hours. 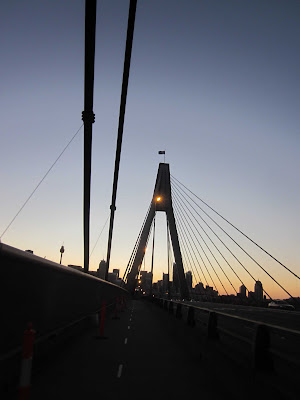 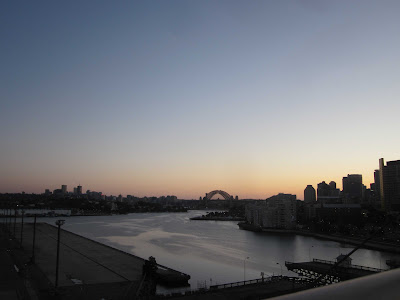 There's the Harbour Bridge in the dawn light - and me racing to get to the start line in time. 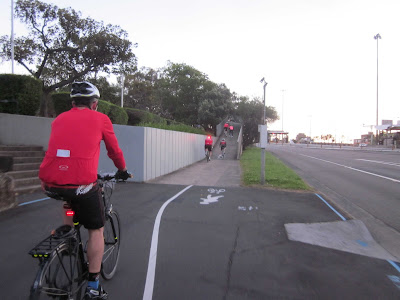 By the time I reached the city, I'd joined up with a steady trickle of riders heading north for the start. 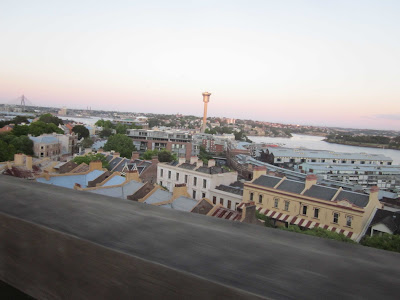 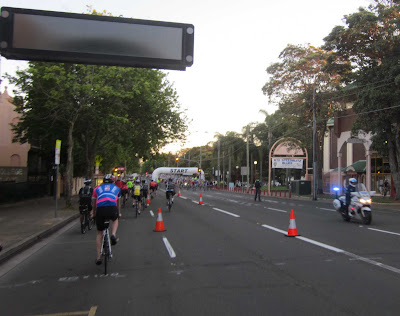 The bastards started things 5 minutes early! I was there at 0625, and watched as the police motorbike on the far right led the first group off. 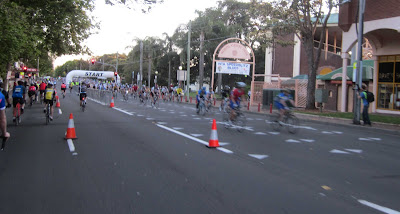 And there they go - the speedy buggers up front. 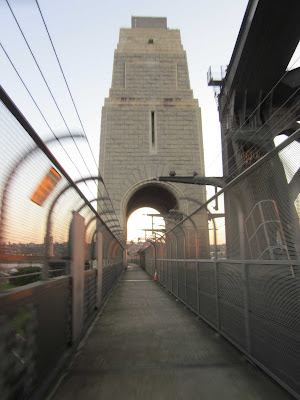 Photos are a bit out of order here - this is me heading over the bridge on the bike path. 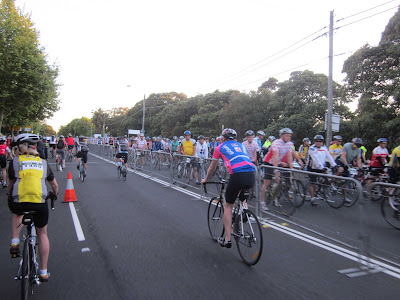 Lots and lots of cyclists at the start, all waiting to be waved off. 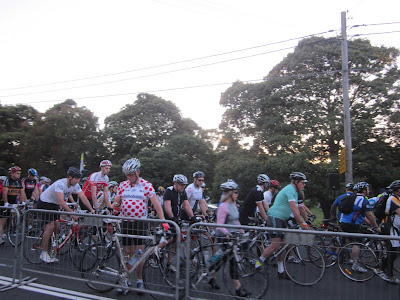 Lots of middle aged blokes stretching the lycra around their tummies. I would class this event as "the middle classes at play". There were a lot of blokes my age and older, riding bikes a lot more expensive than mine, and with corporate jerseys advertising various financial institutions. It must be great to police one of these events - no drunks, few idiots and a great mass of law abiding family folk just out to enjoy themselves. 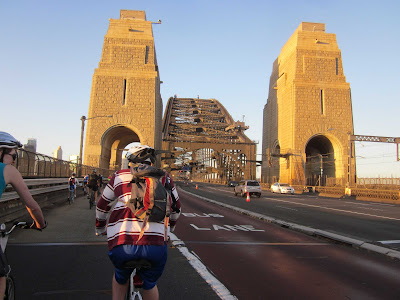 Approaching the arch of the bridge. 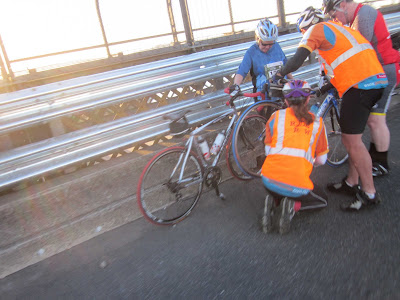 A breakdown crew helping with a mechanical. 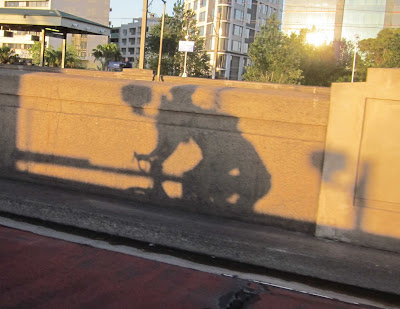 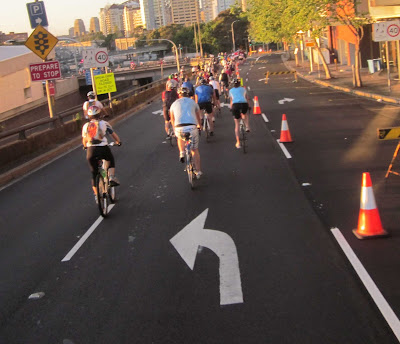 I couldn't take many photos as I was always surrounded by lots of other bikes jockeying for position. Taking one hand off the handlebars was too much of a risk with that much traffic about. 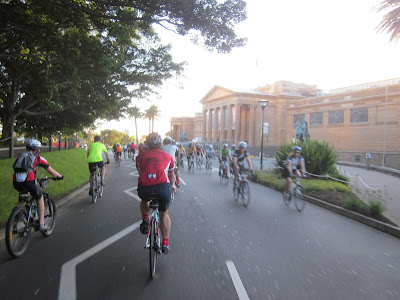 Passing the Art Gallery in the Domain - the cyclists coming towards us were those first away at 0625. They were moving. 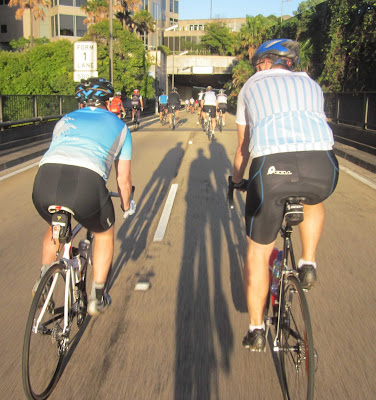 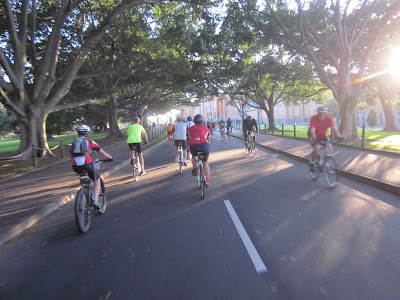 Going under the fig trees in the Domain. It's a lovely place to ride around. 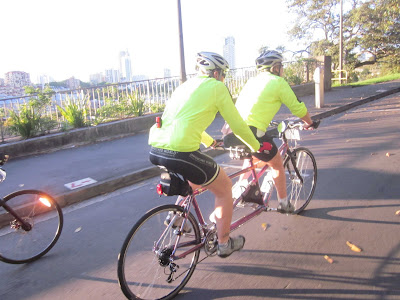 This bloke's jersey was about "racing begins at 40", with the website being 4tplus.com - ha ha. 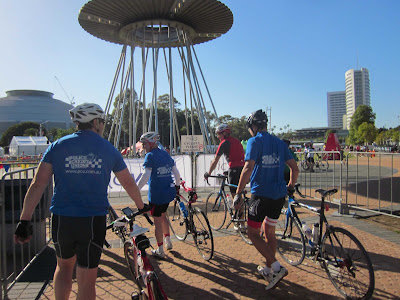 Woops - well ahead of ourselves here. This is the finish line in Homebush Bay. 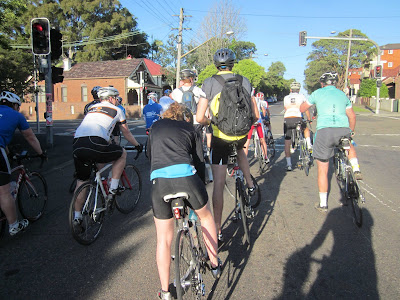 An event like this has lots of starts and stops - one reason I wanted to get away early was that after 0700, the crowding gets so bad, you spend more than half your time braking to avoid people in front. 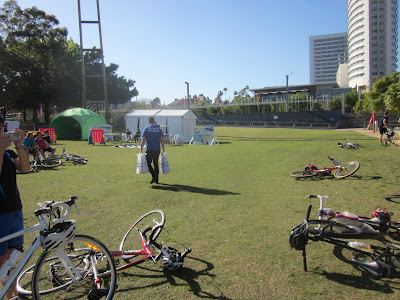 Tim Blair would hate this - there were people walking around all the cyclists at the finish line handing out copies of the Daily Telegraph - imagine that; the Telegraph supporting a cycling event!

This year's was the best I have done, mainly because I got to the start early enough to avoid the sluggish riders. Only "experienced" riders were supposed to start at that time, and I would rate myself at the bottom of the "experienced" pack - but there were hundreds there at that time who were clearly much worse than me. Over the first 10km or so, a slow sorting took place, with faster riders filtering to the front and the slower riders being dropped.

After that point, the group I was with had overtaken almost all the slow riders that got away before us, and we were able to settle into a nice rhythm where we weren't having to brake constantly for the slugs up front. The pace held at a comfortable 32km/h or so from then to the end (traffic lights and hairpin bends excepted). Like I said at the start - it's not a race, and no one was treating it as such. We spent a lot of time on narrow paths with poor sight lines where overtaking just wasn't possible because of pedestrians wandering the other way.

I'm now utterly wasted - the ride to the start from home, then the ride itself, then the ride home from the finish has done me in. It was about 4 times the distance I am used to doing in one hit, and I didn't spare myself on the few small hills along the course. Commuting gives me lots of short rides of 15-20km; my legs just aren't used to doing nearly 80km in one hit.

What it showed is that I am fitter than about 80% of the cycling population, which probably makes me fitter than 95% of the blokes my age.

And now, it's time for a nap. After some chocolate cake.
Badly proofread by Boy on a bike at Sunday, October 16, 2011

Fitness is a state of mind

Or a state of behind.

You're a fitter man than I am, Gunga Din.

Kae said what I was thinking.

Boy, I've just found details of a fascinating course in Brisbane. Build your own penny-farthing!

The guy running the course did a recent interview on ABC local radio.