Lovely day again today - another great day for a ride out west. It's been cool enough to require two layers (three if you're riding at dawn), and that makes for a pretty brisk ride. I've clocked up about 100kms this weekend, and here's a selection of photos.

Every now and then, I cross one of the bridges going north over the river and ride through suburbs like Ryde and Gladesville. Just for something different. There's a really nice, wide bike path around the water heading east from the Rhodes bridge, but it doesn't go the whole way to Gladesville. I'm used to it stopping at a certain point. When I rode it today, I found that a new section of concrete had been laid, so I followed it on a whim.

It was a nice little bit of fast, winding path, but it finished at the bottom of Bayview Street, and what a bastard of a place that was to stop. You can't tell by this photo, but this short section of street is almost too steep to walk up! It's about as close to vertical as you can make a street - and riding up it required every bit of power my legs could give just to keep moving forward. I have not experienced that in years - I've done a lot of long hills, and a lot of steep hills, but this one took the cake.

Council is going to have fun extending it any further, as from looking at Google maps, the next section of waterfront includes quite a few houses that extend right to the waterline.

That bit of bike path wasn't the only missing link on my jaunt - this section was blocked off for "construction" reasons, and as my geographic knowledge of this area is complete rubbish, this was the time to turn around.

I was one of about 10,000 cyclists out this morning (or so it seemed) - the buggers were everywhere. Old ones, young ones, kids being pulled around in contraptions by their parents, tandems - you name it. It was that kind of day where, after weeks of miserably awful wet cold weather, lots of people obviously woke up and thought, "time to stretch the legs a bit this morning".

I really like this old bridge - about 25 years ago, the old steel railway bridge over the Parramatta River was replaced with a concrete monstrosity right alongside. Instead of tearing down the old one, sheets of perforated something or other were bolted down onto the old rail bed and it became a bike bridge. It rattles beautifully from end to end when you ride over it.


Nice weather and lots of cyclists means a certain proportion of complete and utter incompetents. I was stuck behind the woman above for some time as she couldn't maintain a straight line - and by that, I mean she was swerving three feet or so to each side - there was no way to pass without risking a visit to the grassy verge. Some adult bikes need to be equipped with trainer wheels. 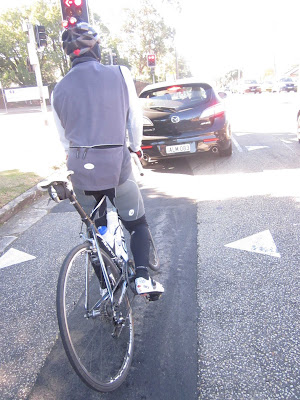 This bloke was riding a very nice bit of kit, and he was also decked out in some very nice rider-wear (ie, expensive). He was also quite a rarity - I left home about 0900, which means all the fast-lycra crowd were finishing up and heading  home. Most of the people I saw out today were dressed casually and weren't riding fancy road bikes - they were on all sorts of laid back contraptions, and there was hardly an item of lycra to be seen.


I love these old cranes - they're very much 1930's industrial architecture.


Cav ran a story last week about a cyclist getting clobbered in Gongolia (not sure if he was in Inner Gongolia or Outer Gongolia). As there was a bike path running alongside the road where he was hit, most reasonable people would ask, "What the hell was he doing on the road?" I'll try to answer that today.

Hill Road is strangely named, as it is dead flat. Probably named after a Mr Hill I guess. It runs along the edge of Olympic Park down to a ferry terminal at the end. Last time I rode out this way, the bike lane me and this other bloke were riding in didn't exist. This was car parking. There is a bike lane about 20 feet to our left behind all that shrubbery.

Why were we on the road?

Well, partly out of curiosity, but mainly because the bike path means contending with lots of pedestrians, slow cyclists, blind corners and roads that cross it; whilst the road is just open, straight and utterly without impediments. Whilst you can generally get up to about 30km/h on the bike path, that's on days when you are the only person on it. The rest of the time, 25 is about as fast as you can go without getting into risky territory. Out on the road, you can go as fast as your legs will push you, which for me today, was about 35.

Just remember that the bike lane alongside Hill Road is a good one - nice surface, wide, mostly straight and minimal blind spots. Most paths that I ride on are narrower, bendier, rougher and are littered with collision hazards (dogs, prams, idiots with iPods etc), which makes them frustratingly slow. They're fine if you're Cav's age and just want to amble to and fro - they're a total bloody annoyance when you want to go as hard and fast as you can for as long as you can.

It's like driving on a 3 lane freeway versus driving on a narrow, winding country road. I like taking the scenic route from time to time, and I don't mine getting held up for half an hour by Farmer Brown and his 600 cows and a dog - but if you're trying to get from A to B in the shortest possible time, that sort of thing drives you mad (which is why 99.999% of drivers take the freeway and put their foot down).

Nice place to stop for a coffee and feed - trouble was, it was packed this morning with bloody cyclists.

Given the number of bikes parked on all four sides of the cafe, I think it's pretty clear how a lot of their customers get there.

If you get your arse to Amory Wharf and want to have a look around, you can even hire a bike. Or you can sit on your arse in the cafe and watch the ferries go past.
Badly proofread by Boy on a bike at Sunday, June 26, 2011