Ha - you didn't think I'd finished with my little saga, did you? Too bad if you did - there are a few parts to go yet. Frankly, I'm brain dead from digesting all the research papers, and am finding it hard to whip up the enthusiasm to get to the finish line. Remember, our aim here is to try and work out whether Bob Carr's idea of a safe injecting room in Kings Cross was a good idea or not.
Here's a bit of thinking that I haven't seen in any of the research - a simple division of the population of NSW into four broad categories. (Oh crikey, it's the BCG matrix all over again). 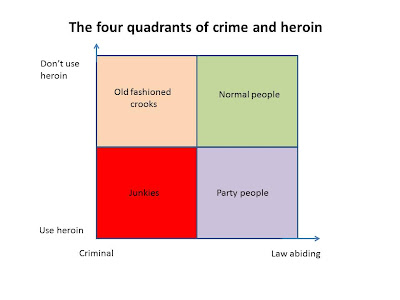 In the top right hand corner, we have people like me and most of my friends and associates - and presumably most of the readers of this blog. Normal, law-abiding citizens. People with jobs and families and maybe a few speeding tickets to their name, but nothing else. They might have done drugs in their younger days (when they were party people), but now they have straightened out and are taking their kids to church on Sunday.
Below them we have the "party people" quadrant. This is where most of my group was 10-20 years ago. We were law abiding (in the main), but liked to party like there was no tomorrow. For some, that meant popping pills, doing a few lines and for the very rare specimen, sticking a needle in their arm. After a Friday and Saturday night bender, they'd be back at work on Monday, putting in a long week to pay the mortgage. Once they started having kids, the benders and the drugs were mainly history.
In the top left quadrant we have old fashioned crooks - crims who prefer beer rather than drugs.
And in the bottom quadrant, we have the customers of the safe injecting room - junkies. We're talking about heavy drug users who support their habit by bludging on the dole and stealing from the rest of us. 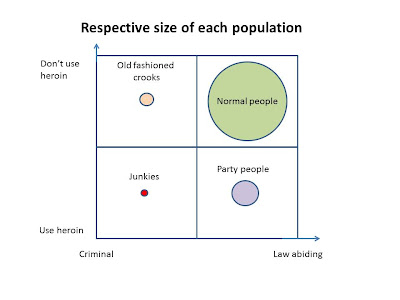 Here's my completely unscientific representation of how big these populations are in relation to each other. Various surveys have estimated that 1-2% of the Australian population have tried heroin at some point. Other surveys have estimated that there were around 20,000 regular heroin users in NSW at the turn of the century. I'm assuming that number has been stable since then.

By my reckoning, the great majority of the population are normal people. They're too young or too grown up to do drugs. The party people population is a reasonable size - that's your 18-29 demographic essentially.

The number of junkies is pretty small really. The population of NSW was over 7.2 million in 2010. We're talking about 0.3% of the population - a tiny fraction. 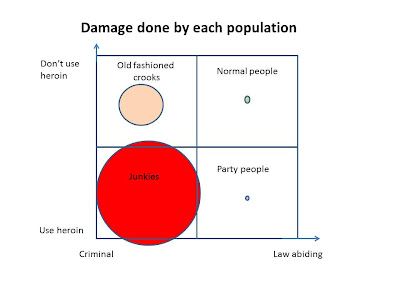 However, that "tiny fraction" is capable of doing a huge amount of damage when it comes to crime and the consequences, plus all the associated health and social welfare costs. People like me (and hopefully you) contribute a lot to society. We do useful work, pay lots of taxes and do our best to avoid being a deliberate dead weight drag on the public purse. Party people might increase the cost of cleaning the footpaths in our cities (ie, hosing off the vomit on Saturday morning), but apart from a few emergency visits to have the odd stomach pumped and face stitched back together, they aren't much of a drag as well.

However, it's my belief that the junkies take the cake. They have the worst health problems. They are almost never employed. They have the worst social and family problems, thus requiring huge amounts of support from an army of social workers and charities. They tie up masses of Police, court and jail time. In NSW alone, the 20,000 junkies need to find up to $1 billion each year to fund their habit, and they get that by sitting on the dole and stealing from the rest of us. If you added on all the other social costs, the total becomes horribly large. 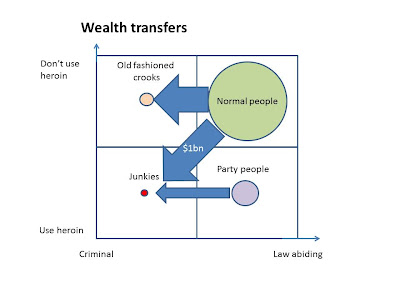 We can represent this by the wealth transfers between these groups. There is a massive transfer of wealth each year from normal people (and party people) to crims and junkies. There is a direct transfer to junkies in NSW of at least a billion through fraud and break and enter and the like (assuming you believe that junkies need at least $50,000 each per year to fund their habit). Given that fenced goods are worth a fraction of their purchase price, unless they are committing masses of credit card fraud, they would have to steal several times that amount in order to raise that billion dollars. Then there is the indirect transfers that include things like us paying for their medical treatment - and paying for somewhere for them to shoot up safely.
So, given all of the above, is a safe injecting room still good policy? What does it do to stop a junkie from walking down Glebe Point Rd when I'm having dinner in a restaurant, and smashing my car window to get at my GPS? Does it do anything to reduce the enormous burden on the public?
Badly proofread by Boy on a bike at Thursday, June 09, 2011