Having read a fair amount of abuse regarding the Bourke St bike path since it was opened a few months ago, I thought I'd ride it today to see how it stacks up. After all, it's not really fair to abuse the hell out of something if you haven't given it a go.

We've had lousy weather here for the last week - wind, rain and enough low cloud to make it dark at noon. I had to use the "lighten" feature in my photo editing software in order to make most of these photos viewable - and by "lighten", I mean crank it up by 50%.


It wasn't a great day for cycling - once again, about the only people who were out and about were those walking dogs. It was a good day for putting on a Tour de France video and watching top athletes cycling through France in the heat of summer.

Getting to Bourke St wasn't the easiest - I haven't splashed out on a GPS for the bike yet, and my navigation skills are rubbish. I used to live in the East, and walked up Oxford St more times than I can count, but I still couldn't remember which street was Bourke St.
I ended up riding too far up Oxford St, completely missing the Bourke St turn off. Thankfully, the bus lane is really wide and even better, there were no buses around today (it being a public holiday). I rode part of the way with the mad Asian bloke in front of me. No helmet, earphones on, music up loud, fixie - in other words, all the hipster accoutrements. He also had bandaids all over his face - presumably from stacking the fixie into something. Some people - hipsters in particular - have no brains to lose from crashing without wearing a helmet.

I had absolutely no idea that there is a Korean War memorial in Moore Park. Then again, it was unveiled years after I left the east.
The link above explains what it's all about. Due to the really lousy light today, the wording on the battle monuments completely failed to come out. The one above reads "Kapyong".

The intersection of Bourke and something. Nice looking house.


Right - after about an hour of riding, I finally round the Bourke St path. I was quite surprised - it's quite straight, doesn't have much of a gradient and it's a really nice leafy street to roll down at 25km/h. The bike path isn't built for racing - it's built for cruising, or perambulating. Going 30 km/h would be way too fast - but I didn't feel the need to go fast. It's just a really cruisy piece of work. 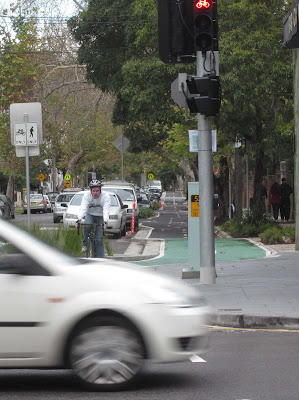 I wasn't even annoyed at the long wait at the traffic lights at Cleveland St. I was very chilled (and I'm not referring to the rather brisk weather).


From what I can gather, the whole idea of this path is to service all the new residents in this mini-city of apartments that has sprung up at the bottom of Bourke St. This used to be industrial land - a brownfields site.  It's now home to umpteen thousand yuppies. I rolled past the Bourke St Bakery, which is obviously the inner-city hipster place to buy sourdough. The queue stretched out the door and partway down the street. Everyone in the queue was a hipster - they looked at me like I was an alien - which I guess I was. I wasn't riding a fixie with stupid little handlebars and a beret and a corduroy jacket. 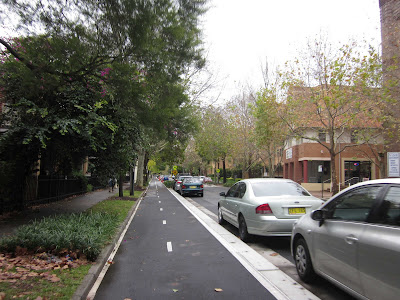 The overhanging trees and all that reminded me a lot of Canberra. It's a really nice area to meander through.


Much of the squealing about the bike path centred around the loss of car parking. I'll post some video later - what I noticed is that there was no shortage of parking. Sure, a number of car spaces were obviously lost, but there was still plenty to be had. From what I could see, most of the parking was lost to build up the spaces around pedestrian crossings, like the one above. Notice the green, garden thing poking out into the road to stop people parking right up next to the level crossing? I bet that's the thing that ate the car spaces. If that's the case, the spaces that were taken were the really dangerous ones that block sightlines at pedestrian crossings, meaning they should have been eliminated whether a bike lane was built or not. 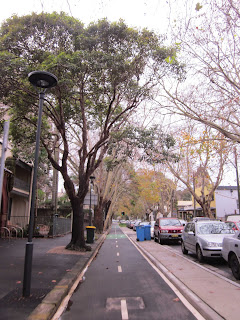 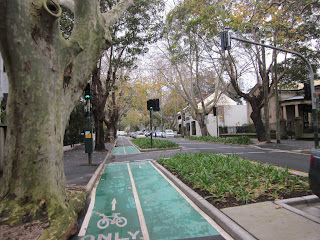 Like all bike paths, this one had its share of uncaring pedestrians that strolled across it without looking. At least I only spotted one pedestrian walking ON the bike path - something that really annoys me. That's a good way to put two people in hospital.

My biggest gripe is that when I turned around and came back, the thing just petered out on the wrong side of Taylor Square. It soon became obvious why I had missed the path when coming from the city - there are no signs anywhere (that I saw) telling you where to turn to hit the Bourke St path. The best way to describe the path is that it's a path from somewhere (a stack of apartments) to.... nowhere.

Miserable day for a bunch of bike tourists to be seeing the sights.

I completely stuffed up my eating times before I left, which meant I ran out of energy about 3/4 of the way home. That required a stop for a chocolate mud cake muffin - which really hit the spot. I know most people would say, "I can't eat that - it'll ruin my diet". My attitude was, "If I don't eat it, I won't make it home. I will expire on the side of the road somewhere".
How would I describe the bike path experience?
Before I went, I was very sceptical that the Bourke St bike path was worth the bother. I regard most of the Pyrmont bike route as an expensive disaster, so my opinion of Clover Moore and her minions was not high. In fact, I'd sooner defend a group of rock spiders than Clover most of the time. No, all of the time.
Except now. I have to say that the path was a revelation. I was really deeply impressed at how good it is (apart from the opposite camber at one point). I think it's worth keeping.
Oh gawd, I've just realised that this means if the path is threatened, I'll have to go along and protest with a bunch of stinking hippies and hipsters. I knew I shouldn't have gone for a ride today.
Badly proofread by Boy on a bike at Monday, June 13, 2011

Not "a path from somewhere (a stack of apartments) to.... nowhere", O Fearless Boy On A Bike.

The "somewhere" at the southern end of the $20 million Bourke Street Cycleway is ... Clover Moore's house in Kepos Street Redfern!

Ah, that explains a lot!

Easy to change your mind riding it on a Public Holiday monday. I know you cant do it but try riding it at 9am on a weekday.

It seems that you did not ride along the section in Bourke Road betwen Botany Rd and Gardeners Road, it is the section where all the parking has gone. In the industrial/retail area.

Hi Mark,
I've no idea on how to contact you, other than via this Blog post. I'm writing to ask of your permission to use these photographs in your 'Bourke St cycle path' article on your blog, for a business marketing assignment about the Clarence St. cyclery that i have to complete. you can send me a reply at michaelmai.tafe@hotmail.com

As for the bit further south, the only reason I didn't ride it was because I couldn't find it! Says a lot for how badly it's sign posted for newbies.

Looks cold there.
Cooling down here also, in fact so cold that some nights I seriously consider switching off the air conditioning before going to sleep.

I would like to thank you for the efforts you have made in writing this article. I am hoping the same best work from you in the future as well. Assignment Help Essay Writing Service Assignment Help Australia

It proved to be Very helpful to me and I am sure to all the commenters here!
make my assignment

My Assignment Help offers affordable and reliable assignment help to students across Australia. We will provide proper guidance related to the assignment and facility among the students. We provide 100% plagiarism free work and the task will be completed within the time limit.