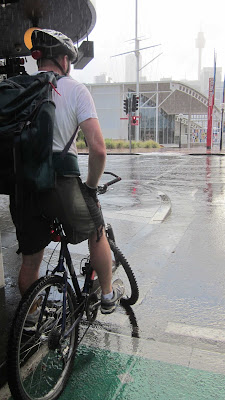 Had a busy week so far - haven't had time to scratch my bum, let alone post stuff. First photo is from Monday - it was fine when I left home, but it started pouring down when I reached the edge of the CBD. It warmed up after that and it hasn't rained much since, but I've been getting home totally saturated with sweat. I'd rather be riding in the rain. 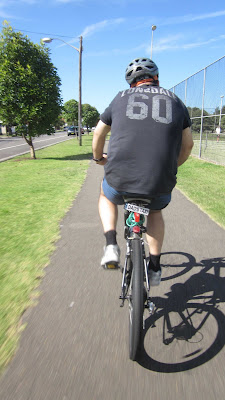 See the number plate under the seat? "Dad's taxi". 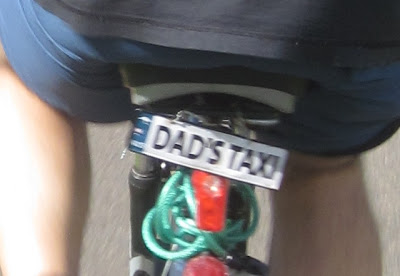 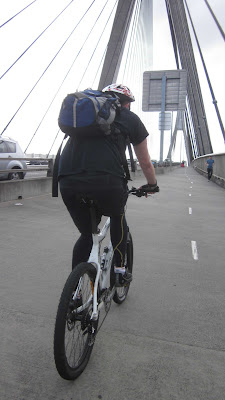 Shane Warne stirred up a bit of controversy this week when he tangled with a cyclist in peak hour in Melbourne. Here's the cyclist's side of the story. My view? Get a video camera so that you can record whatever happens on the road. Sooner or later, you're going to need it.

Whilst most cyclists tend to be fairly polite and law abiding and sensible, along came the knob above to prove that some cyclists are impolite, law breaking idiots. I rode behind this bloke for about 3 minutes. In that time, he almost ran down a pedestrian at a cross walk (I had slowed almost to a stop to let the pedestrian pass, and he tried to go around me and only pulled up at the last second - in a huff), he then yelled at a pedestrian (although the pedestrian was being an idiot by standing stupidly in the middle of a bike lane whilst he had a red light) and he then rode down the wrong side of a traffic island to get around a corner 3 seconds faster than if you went the right way (like me).

I wasn't pushing it - I picked up an infection on the weekend, so I've been riding at about 70% of my usual pace this week - but I still managed to zip past him once we were on the Anzac Bridge. His biggest problem is that he was unfit and slow. If he was fitter and faster, he wouldn't have to be so aggressive and rule breaking in order to get home quickly. He was taking stupid shortcuts because he wasn't strong enough and fit enough to maintain a fast pace. I stopped at the red lights, gave way to pedestrians, smiled at the guy he yelled at, followed the road rules and still blew pasts him. 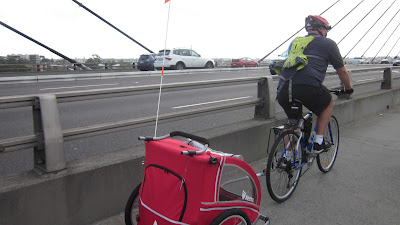 This bloke wasn't going anywhere in a hurry - it would be hard work dragging a kid or two up a hill like this. Pretty fast way to lose a bit of weight.
Badly proofread by Boy on a bike at Thursday, January 19, 2012

BOAB
So Warnie has a point? I was expecting an in-depth analysis, not a passing reference.