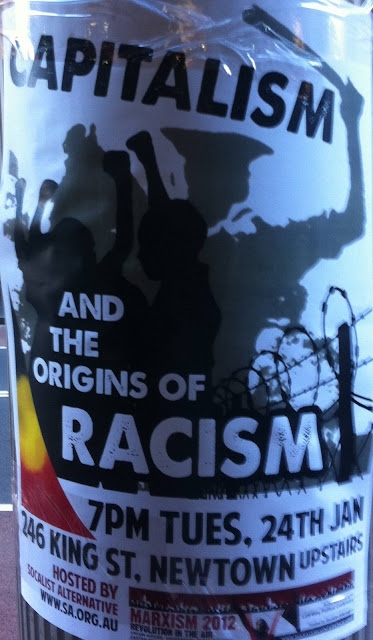 "Capitalism and the origins of racism".

Wouldn't surprise me if the meeting is attended by people like this (go and read the whole thing - hilarious):

After that the speaker seemed to me to cast off all pretence of rationality and even plausibility. Our compromised blood/brain barriers are the result of a conspiracy between the government, the medical profession and the pharmaceutical industry. The earth has a heartbeat, which is increasing in rapidity. In 1911 it was 7.4. Today it is up near 11. The HIV virus is a myth put about to promote the Aids industry.

But we needn’t despair. Society is changing. The earth is travelling in a part of the universe saturated with health-giving, consciousness-changing photons. The pharmaceutical companies and ‘powers that be’ know this. That is why they are currently doing everything in their power to prevent us getting that photon-electron attachment to our cells. But they can’t prevent us from going barefoot! They can’t asphalt over the entire planet! Here, spontaneous applause broke out. The audience was absolutely lapping it up. They might be brain-damaged but they were still the local intelligentsia and they could still recognise truth when they heard it. But I’d heard enough. I knocked back the dregs of my beer and made for the door.
Badly proofread by Boy on a bike at Saturday, January 14, 2012

My wife, being a Chinese who actually lived under the Communists, lost family members, property, exiled, etc.is amazed anyone could be so stupid to follow it here.

I'm a former member of SA and I can tell you there is no way those meetings are as interesting as you believe them to be.
Picture a room full of earnest yet scruffy 20-something hipsters listening to a slightly more strident member lecture them on the topic of the day in classically Marxist (ie, MIND NUMBINGLY BORING) style. For about 90 minutes. Probably in a stuffy room with no climate control.
These meetings should of course be avoided like the plague, but the participants should merely be pitied. They are not wild-eyed nuts (for the most part), they are just unable to believe most far-left groups in Australia today are in fact cults.